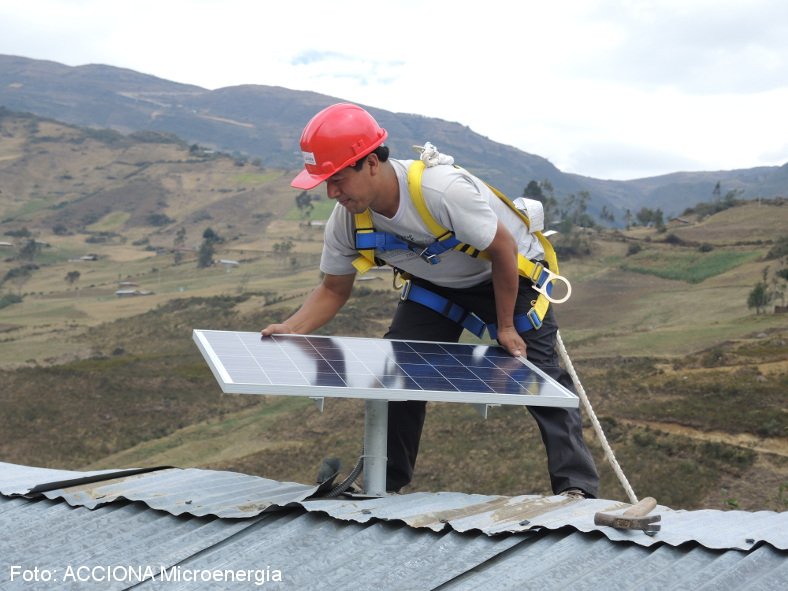 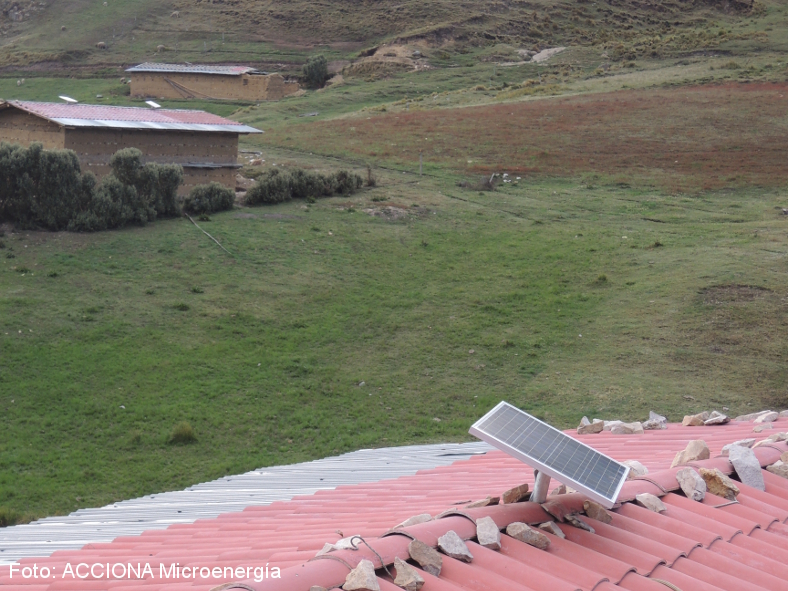 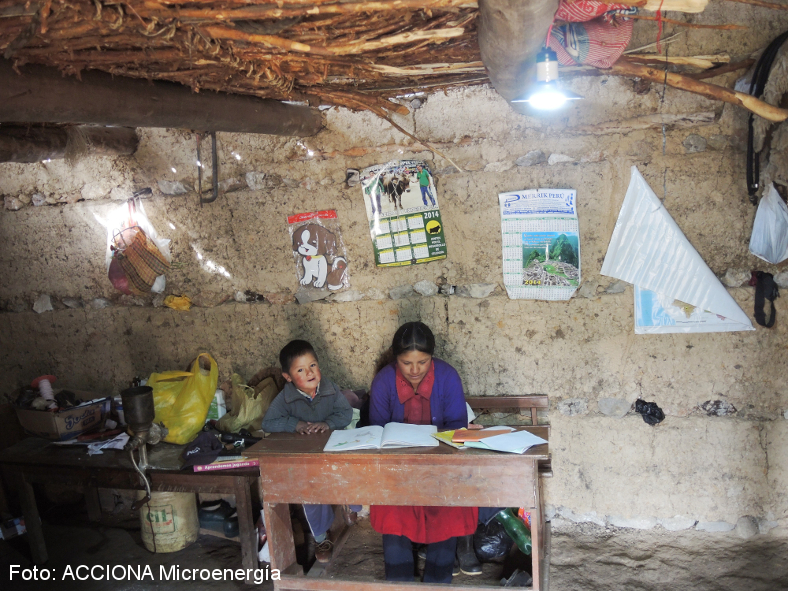 “Luz en Casa” program demonstrates the feasibility of the rural electrification, with solar home systems, under terms of economic sustainability and affordability to low-income households (3,900 up to now). It is being developed in Peru, in isolated and dispersed communities of Cajamarca where the extension of the national grid is not planned.

ACCIONA Microenergia Peru was created in 2009, as an electricity provider with a fee-for-service model, and began the Luz en Casa program. The target was to give a sustainable and affordable basic electricity service with photovoltaic systems to very low-income households. In 2010 the electricity regulator introduces the photovoltaic tariff which allows the application of the social tariff to the electricity users supplied by off grid solar home systems. “Luz en Casa” implementation was conceived as successive projects in order to obtaining funding and familiarizing the potential users. Every project comprises: previous works with the communities; establishment of the Photovoltaic Electrification Committees-PEC (which deal with ACCIONA Microenergia, collect fees and inspect the use of SHS); engineering and purchase of the equipment; training of the users, PEC members and local technicians to install and repair SHS and; installation and start-up. During the exploitation, ACCIONA Microenergia charges users a monthly fee for its services, which initially was equivalent to their average expenses in alternative energy elements. The new regulation for isolated photovoltaic systems, in whose proposal ACCIONA Microenergia was present, made possible its access to the existing cross subsidy system, and allows the reduction of the users’ fee by 30% in May 2011. In 2013, ACCIONA Microenergia achieved 3,000 users, and so its break-even point. In 2014, 900 households more were attended.

The beneficiaries of “Luz en Casa” are 16,500 people (3,900 families) of isolated rural communities of Cajamarca (Peru) living in poverty and extreme poverty. A recent MIF-IADB’s impact measurement, developed under a quasi-experimental method, confirms that 80.8% are poor and 98.3% are vulnerable.

ACCIONA Microenergia Peru, a social micro company locally established, is providing basic electricity, day after day, in an economically sustainable mode, to 16.500 low income people of isolated rural communities. 40 beneficiaries, including 2 women, can work as independent professionals to install and repair SHS. 2,600 installations developed in 2013-14 have been subcontracted to these technicians. 16.500 people have access to basic electricity which allows them to reduce the energy cost, to have a better illumination, to reduce the fire risk, to avoid the smoke of candles and kerosene, to read and prepare the school tasks… The MIF-IADB study measured all this impacts. Expenses on candles and batteries are reduced in USD3.6, equivalent to the paid fee. The increase of collecting wood implies savings of around USD4.9 on buying it. 31,000 tons of CO2 emissions and the dispersion of 105 tons of non-biodegradable batteries will be avoided during the entire life of the project.

ACCIONA Microenergia Peru owns, installs, operates and maintains isolated photovoltaic systems, giving its electricity services in return of an affordable monthly fee. The implementation of this business model has counted on the engagement of all the involved actors: the private sector as promoter of the initiative, the authorities as developer of a favorable framework and, specially, the beneficiaries as users, members of the Photovoltaic Electrification Committees and local technicians.

The off-grid rural electrification with renewable energy is feasible in sustainable and affordable ways. Technology is reliable and cost effective. And innovative business models developed by new private actors can be successfully implemented. The approach to beneficiaries is the cornerstone: the social work with the communities is critical to the sustainability of the off grid electrification. The regulation framework is critical to facilitate affordable electricity access to isolated areas.. In Peru, as in other many countries, there is a social tariff based in cross subsidy, which, ironically, could not be applied to the poorest people. A regulation modification changed this situation.

“Luz en Casa” has an innovative business model, which differs from others in off-grid rural electrification because ACCIONA Microenergia Peru is the owner of the SHS and thus responsible of their operation, guaranteeing its long-term sustainability. In addition, the work together with the Peruvian authorities has allowed achieving a favorable regulatory framework which guarantees the affordability of the electricity service to low-income users, as well as avoiding overlapping with power lines extension. But the core of the model is the beneficiary, who accepts to participate voluntarily in the program and performs different roles in its management. This involvement has made possible to achieve the critical mass of 3,000 users in 2013, only 5 years after the beginning of “Luz en Casa”. In 2014, there are 3,900 attended families, which have improved their lives in social, educational, economic and productive ways, and plans to scale the solution at least up to 20.000 families.

The Spanish corporate foundation ACCIONA Microenergia supported its initiative “Luz en Casa” not only from the economical point of view but also with technological and management support. Cajamarca is the poorest Department and has the worst electrification rate of Peru, country with the second largest number of unelectrified people in America. The ACCIONA Microenergia foundation has been the main investor of “Luz en Casa”, having funded with cash donations a 55% of the program. The Inter-American Development Bank made a donation by 6% of the program, and ACCIONA Microenergia Peru awarded a long-term credit (from IADB) for purchasing SHS, that added to its own funds from monthly incomes per user (fee plus cross subsidy) totals its contribution in 39%. The ACCIONA Microenergia Peru electricity services imply the use of three lamps during 8h/day, mobile charging and TV/radio connection during 4h/day.