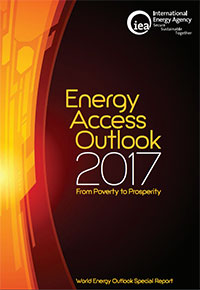 The International Energy Agency is a Paris-based autonomous intergovernmental organization established in the framework of the Organization for Economic Co-operation and Development in 1974 in the wake of the 1973 oil crisis. Today the IEA presents itself as an autonomous organization which works to ensure reliable, affordable and clean energy for its 29 member countries and beyond. Members are industrialized countries.

This is a Special Report published with the 2017 World Energy Outlook (WEO). The WEO is the “flagship” annual publication of the IEA. It provides strategic insight on today’s policies, long-term trends and related investment decisions.

Special Reports have been associated to all recent WEOs: a focus on Renewable Energy in 2016, on India in 2015, on Africa and on Nuclear Power in 2014. One of the three special topics of 2011 was “Energy for All. Financing Access for the Poor”.

Access to “modern” energy, defined as including household access to a minimum level of electricity; household access to safer and more sustainable cooking and heating fuels and stoves than traditional biomass stoves; access that enables productive economic activity; and access for public services.

Electricity: China has reached full electrification in 2015; in India 0.5 bn people have gained access to electricity since year 2000; other developing countries in Asia are progressing rapidly, while progress is slow in Sub Saharan Africa, where the electrification rate is still 43%.

Clean cooking: there are some notable success stories especially in China and Indonesia with people switching to liquefied petroleum gas (LPG); yet over one third of the world’s population still rely on the traditional use of solid biomass or coal or kerosene, although awareness of the health and environmental risks has increased.

Year 2030 is when universal access should be reached according to the Sustainable Development Goal no.7. This Report makes reference to a New Policies Scenario (existing policies plus announced policy intentions), which provides a mixed answer.

In the case of electricity the Goal will be reached except in Sub-Saharan Africa where 600 million will be without electricity access, out of a world total of 674 million; 85% live in rural areas.

The Goal will not be reached by 2030 for clean cooking: 2.3 billion people will remain without access, of whom 1.9 bn. in developing Asia and 850 million in sub-Saharan Africa.

A special effort to attain the Goal, both for electricity in sub-Saharan Africa and for clean cooking, can be made: it is described in the Energy for All Case.

Investment is necessary to attain the Goal. Investment levels in the New Policies Scenario are twice as high as historic levels; in the Energy for All case they are even higher. Yet the order of magnitude of investment required for universal access is estimated around 3% of ordinary annual investment for energy infrastructures in the world. So the additional effort is not beyond possibility.

A shift in the energy access paradigm. The path before us is different from the path followed to get where we are. While grid extension has been dominant in the past, it will cover only half of the task ahead for access to electricity. The importance of off-grid solutions (either stand-alone systems or mini-grids) is increasing. For clean cooking the amount to be invested is very small, while the main difficulties are organizational and cultural.

Data. Abundant documentation is reported in print and more (like country figures) is available in the WEO website. The sources are numerous and the IEA team has done a great effort in collecting and validating data. This will only be possible at intervals of years.

The dispute over a possible conflict between the Goal of universal access to energy (no.7) and the Goal of combating climate change (no.13) is closed. No conflict. The increase in electricity consumption associated with universal access is only 0.2% with respect to the base case, while diffusion of clean cooking will reduce atmospheric pollution including GHG emissions.

A slightly more optimistic stand than last year on access to electricity. As many experts in technology are saying, progress (in solar generation, in electronics applied to grids and minigrids, in batteries) is accelerating and can surprise forecasters. The IEA scholars duly revised their previous estimates: their outlook of 674 million people without access to electricity in 2030 is 14% lower than forecast in last year’s WEO.

Technology diffusion. While the progress of technology is a safe bet, speed of its diffusion is uncertain since it depends on social aspects, creation and development of local markets, cultural change.

We dare add, since it is implicit in the IEA report, that much depends on whether the bottom-placed countries will enjoy peaceful conditions or will be plagued by war.

Business models, adequate to the local needs and opportunities, should spread. Access is often a profitable activity since poor households are presently paying a high price for inadequate solutions. How fast the new breed of operators and business models will spread is a crucial and open question.

Finance is also experiencing a paradigm change, with an increasing need of flexible tools that may bring adequate financing to small and medium enterprises, local public authorities, cooperatives, and NGOs engaged locally: a task different from financing large investment projects.

Actors. The gap between access according to the New Policies Scenario and Energy for All is large enough that it is unlikely it can be filled by government and official development aid resources. Other players are needed: new entries and/or an increased engagement of present operators. Large private-public concerns may reconcile size with flexibility, speed, and local diffusion. New and specialized investment funds may equally reach small local operators.