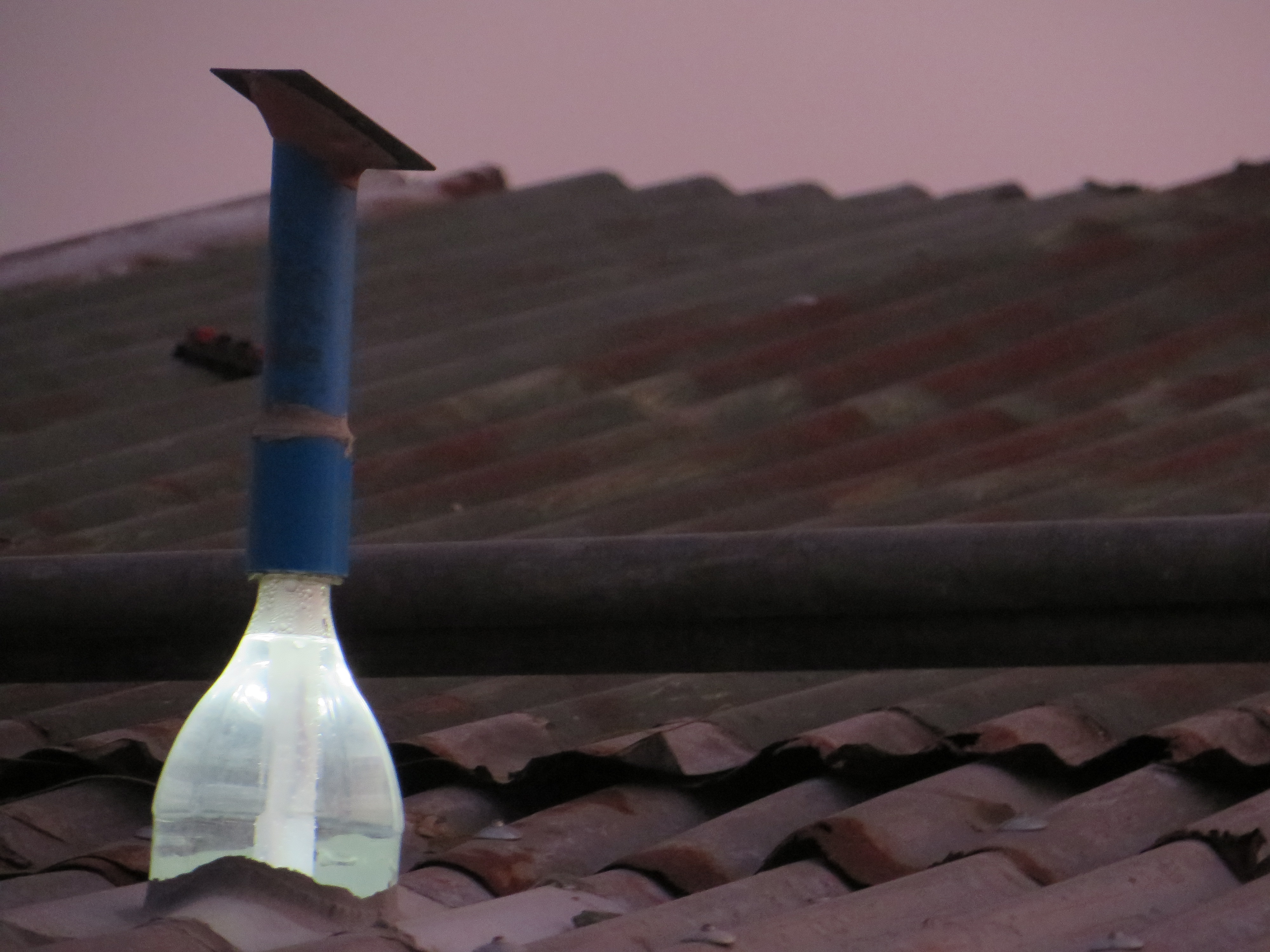 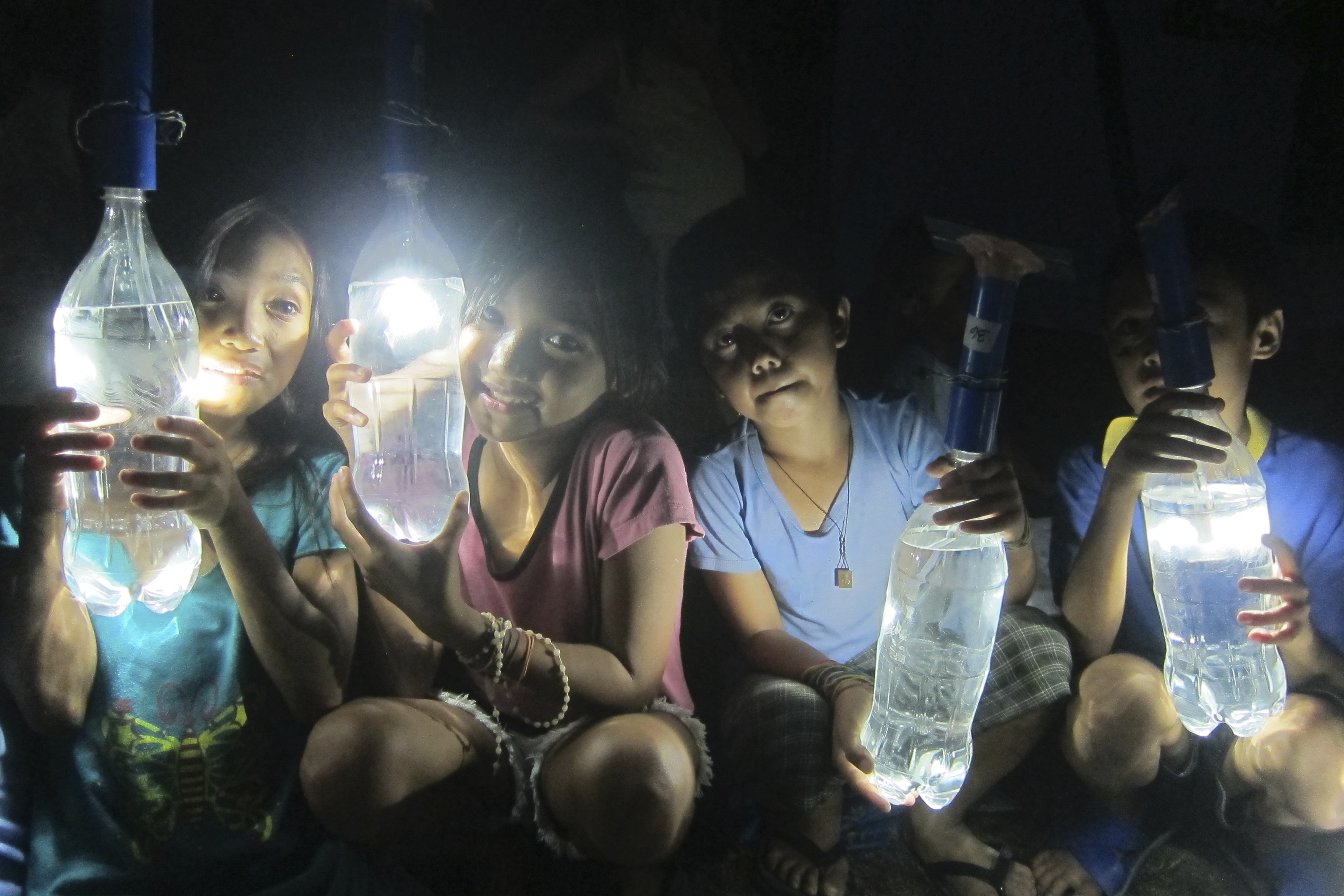 Enlighting Iloilo Island (Philippines) after Yolanda, the strongest typhoon of 2013

Liter Of Ligh provided to the lack of energy that hit more than 50.000 Philippinians in Iloilo after the supertyphoon Yolanda, 2013.In 7 months Liter Of Light installed around 7000 light devices that enlighted the island, using an eco-friendly, cheap and simple technology that converts solar energy to long-lasting CO2 free illuminating systems.

The super typhoon Yolanda (Haiyan) wich hit the Philippines on 8th November 2013 caused thousands of victims and the displacement of hundreds of families. Tacloban, Leyte, Samar, Iloilo and the neighbouring towns and communities had to deal with the total absence of hospitals, houses, buildings, vehicles, power poles and, of course, energy trasmission. Thanks to the trust of the Roche Inc. Corporate Social Responsibility and the help of the NGO Pro-SR, it has been possible to buy, assemble and install parts required to assemble solar lamps able to give light to 5.000 households in the damaged communities. The volounteers of Liter Of Light and Pro-SR, a local organization of professionals composed by doctors, engineers, professor, businnessmen and privates active in addressing social issues to Iloilo made possible to conclude in 7 months the whole illuminating network of the island by installing solar domestic night lights, solar pedestrian lamp posts, street lights and solar mobile rechargers. After the finalization of the project, done in January, the istallation activities started on march by involving Roche employees, the women and the men who have been hit by the typhoon and Liter Of Light personnel until July, after reporting and monitoring each step. Since Iloilo's main economical activity is based on fishing, the first operations have been addressed to repair and illuminate the ships and the harbour, so that the economical life could quickly restart. During the activities, a local team has been trained to assembly and repair the lights, so that in case of damage or new orders the population could independently repair the devices or run economical activities connected to PV systems.

The targeted beneficiaries have been the whole population of North Iloilo communities (Ajuy, Batad, Carles, Concepcion, Estancia, San Dionisio), with a special focus on the involvement of women in the assembly process and a high encouragement to continue PV realization and installation activities to the technicians formed by Liter Of Light during the activities.

Given some numbers, during 7 months of activities Liter Of Light has installed 5.000 domestic lights, 1.655 street lights and 983 solar mobile rechargers, giving access to energy to approximately 51.710 people. The solar implants are still in use and good estate. Although, the most important part of the project was the assimilation of the know-how from the local population, especially women, who joined the operations and can now use the experience to produce new devices to be used in other areas and run micro-enterprises connected to PV to sustainably help the local economy.

The choice of using plastic bottles to create the bulbs hasn't been taken just for its functionality: like the other materials that compose the lamp (e.g. the PVC pipes), the bottle is a recycled very long-lasting object that perfectly resists to the toughest climate changes. On the other hand, the first person experience the population lived added to the importance and cost-effectiveness of switching from oil-based generators and illuminating systems, introduced an eco-friendly way of thinking among the people. The sudden creation of micro-enterprises that produce PV devices was another resulting aspect of the project: from the training activities attended during the period of activities, several people became self-producers and repairers of PV lamps, taking the chance of making a virtuous trade from Liter Of Light's open-source technology.

The reinvention of existing technologies should be the base to approach the future: recycling and eco-friendly politics should be the base of the developement. The solar lights (wich have already been installed in 18 countries) are handcraft made using the most common and elementary electrical components on trade, so that the materials are cheap, higly available and the assembly requires only a welding torch. Adapting and reinventing the device is easy, so that the beneficiary can use it in the best way for his needs. For example, Liter of Light has produced several devices just by reinventing its own technology. The key is to find a solution that could both be easily realized in every context and take care of the environment, so as Liter Of Light is doing.

The innovation introduced by Liter of Light doesn't stop to a highly affordable eco-friendly lightening device: by combining PV to LED technology in an ecological and modular way, it has been possible to create a standard format made by Solar Panel, circuit and LED light that can be adapted for almost any context on earth. For example, from the first domestic lamp invented in 2011 Liter Of Light is now able to offer a range of 5 different street lamps, 2 domestic lamps, a table light for students, a fishing lamp and is still working on several other products to face the most disparate needs. Thanks to its simple design and technology, the solar lamps can be easily transported and assembled on the targeted spot, lowering the costs and risks of damaging the materials. The handcrafted circuits improve the already high replicability, making the technicians able to repair and complete with a high percentage of success a solar light. The people of Iloilo seized the help given from Liter Of Light and Roche by assimilating the know-how and creating job places in micro-enterprises that could take care and improve the solar lights network, guaranteeing the long-term sustainability of the project, still monitored from Liter Of Light. Pro-SR association and Roche Inc. contributed to finance and implement the project, by installing, phisically helping and submitting reports and media material to monitor each activity of the project.

Since 2011, the Liter Of Light project succesfully concluded and continues activities in 18 different Countries in the world. The contexts are various, from the southamerican rainforest to the deserts of Pakistan, but in every location the results have been incredibly satisfying: in Colombia, for example, after the intervention of Liter Of Light the criminality fell by 70 %. The United Nation noticed the activities ran from the organization, so that UNHCR became one of Liter Of Light's partner, chosing the solar lamps to illuminate a refugee camp in Ethiopia. At the moment, the NGO is spreading in Europe too, starting from Italy (future headquarter of Liter Of Light Europe), Netherlands and Switzerland, with the aim of awaring and improving the knowledge of the western nations on the difference this technology can make to the people. Thanks to the cost effectiveness, the easy replicability and the emissions avoided proved throught these years, Liter Of Light was insigned on 19th January 2015 by the prestigious Zayed Future Eenergy Prize for Non-Profit Organizations, and was invited to participate to the inauguration of the Year of Light in Paris. At the moment more than 400.000 lamps have been installed, but the aim of Liter Of Light is to illuminate more than 1 million people's life within 2017.