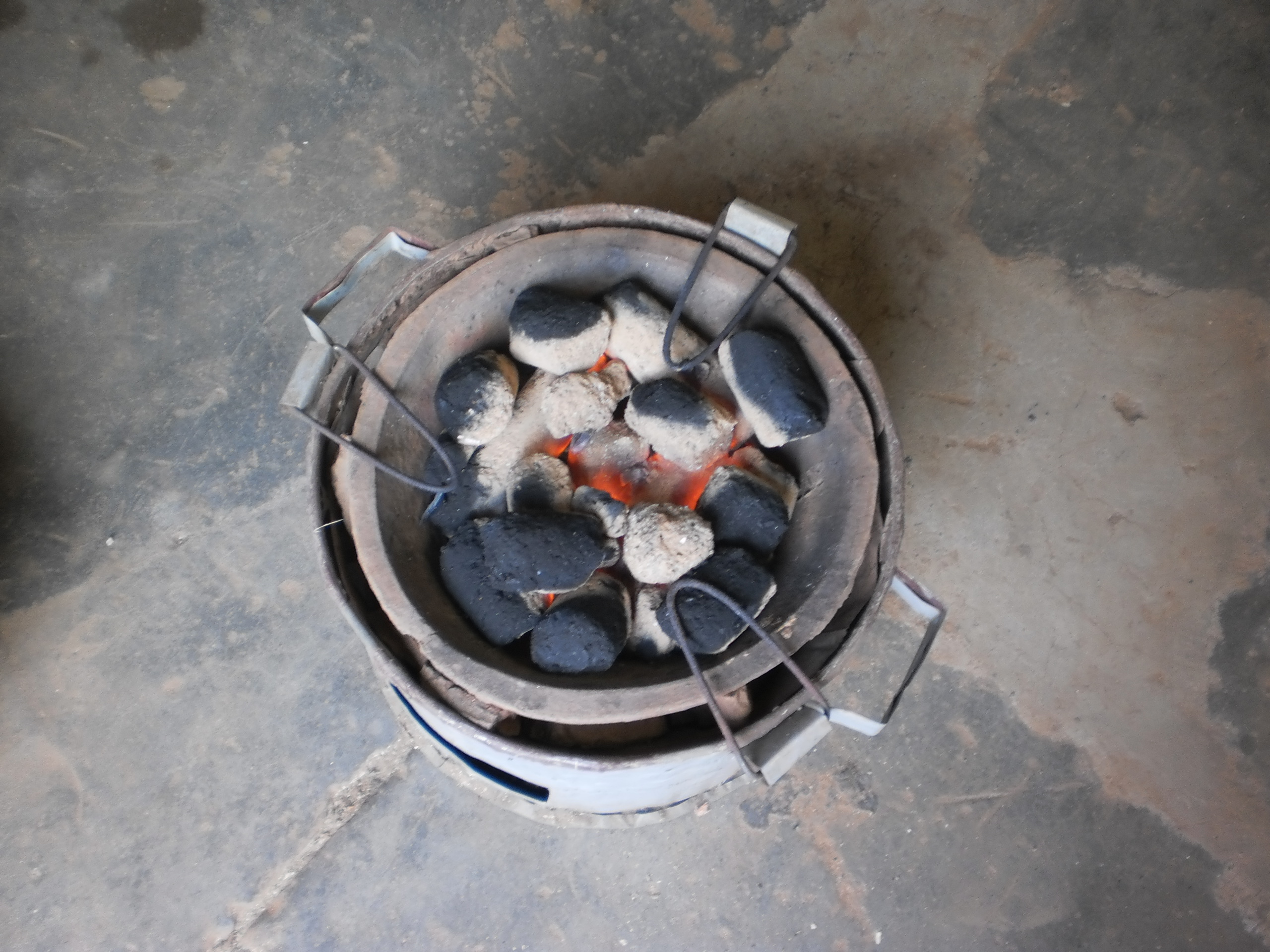 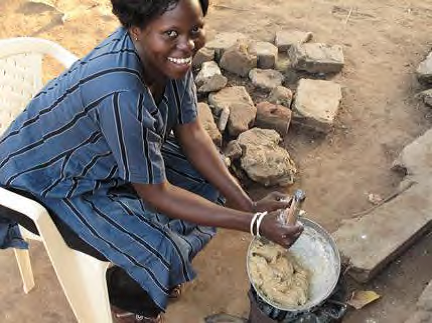 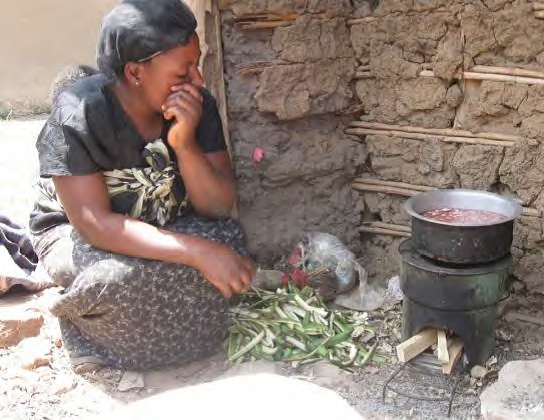 Having been brought in the rural area and almost losing my mum due to bronchitis, i decided to improvise a better, safer, cheap and efficient alternative to traditional biomass fuel for cooking. We begun by molding cowdung rolls and by now we provide smokeless, safe charcoal briquettes to over 5,000 households in Kakamega rural homes and beyond.

Bioamass Briquetting involves collection of the Biomass, sorting,drying,crushing,carbonizing, blending,pressing,drying the product and finally packaging. We have assigned several youths and women (creating indirect employment) with the task of collecting the Biomass and bringing to the yard where its is sorted (manually) and then it is moved to the drying den and then using the locally improvised conveyors, the Biomass is shipped to the crusher, then to the locally fabricated kiln for carbonization. The material is then blended with the locally available binders before being taken to the press where it is compacted into briquette blocks and then dried again before taken to the packaging store ready to be released to he customers. The packaging is done in different forms depending on the need of our customers ranging from the household daily customer to the hotelier and barbeque vendor. There are also some who purchase for retailing.

Our beneficiaries range from the women who collect the biomass, the youth who supply the biomass to the yard, the youths who work at the site, the mothers, sisters, wives who now have cheap, safe and quite efficient cooking fuel compared to the unreliable charcoal, the community and the nation .

This venture has been able to assist our women, and the entire population to address the issue of dependence on the risky, smoky, unreliable, expensive and less efficient traditional biomass fuel for cooking that was the only one hitherto. My mother, can now breathe with relieve thanks to the new innovations of safer cooking stoves and fuels which are smokeless and quite healthy. We used to walk over 10km to the Kakamega forest to collect firewood with my siblings, where we could also encounter dangerous snakes and animals which is now a thing of the past. This has also helped to save the forest reserve since there are few visits for firewood. We have in addition created direct and indirect employment to many youths in this phase and given more funding we are able to expand and touch more lives. We have also reached to many hotels and restaurants which now depend on our products for their daily fuel needs.

We sell our products directly to the end user with few retailers taking our products on a wholesale price and supplying it to the end user in their shops. We plan to partner with the cookstove manufacturers where we can supply our products alongside their products. we also are pursuing a deal with UNHCR to have them purchase our products in Kakuma and Daadab refugee camps where they largely depend on traditional biomass for cooking. We will also produce electrical power using our briquettes.

So far we have learned that with goodwill and determination we can together help this globe to have a safe environment. We have had challenges but they have necessitated innovation and creativity. We begun with cowdung rolls, mixed with local soil and water and due to poor end product, we pushed on with innovations and we now have a product that can be relied on. It is true that necessity is the mother of innovations,we have learned the hard way, some times our clients used to challenge us to improve on the efficiency n of our products and with determination and the goal, we have so far been able to meet over 75% of their requirements and we know with teamwork, stakeholders we will do more.

Sunbeam 2030 is a Private Company registered under the Kenyan laws meaning that it is open to other stakeholders who are ready to work with us in any form of partnerships as will be agreed by the parties especially in our expansion plans where we intent to produce electrical power using Gasification process with our Biomass briquettes as the Feed stock. Since it was founded, Sunbeam 2030, has accomplished the following: We have been able to replace dependence on wood charcoal in Western part of Kenya by almost 42% with our limited resources supplying over 1,000 householders with Biomass Briquettes daily for almost over 5 years now reliably, cheaply and efficiently. We have also intruded into public and private institutions including schools, hospitals, refugee camps and prison camps with our products sold on order basis. Moreover, we have been able to set up 42 local production centers for small scale Biomass Briquettes in the region empowering local communities which serve over 200,000 households in Kakamega County which has a population of 1,660,669-which is our primary target area. We have also conducted several capacity building trainings in the RE and EE field causing a significant positive change in the adoption of Modern cooking technologies. Sunbeam 2030 has been able to create over 500 jobs directly or indirectly in the on going first phase and thus big contribution to the labor sector. We are partnering with The Global Alliance for Clean Cookstoves under the Clean Cooktoves Association of Kenya, CCAK, where we intend to blend our fuel with the improved cookstoves for better working relations.

Exposure to indoor air pollution for billions of people in the developing world along with a biting shortage of fuel wood have made household cooking a global concern. Scaling up access to modern energy services has been redefined to include access to clean energy for household cooking, making it a priority development issue for the international community. Yet the demand for energy services by a growing population is rising by the day. With a population of 1 billion inhabitants Africa is the world's second-largest and second most populous Continent after Asia. At about 30.2 million km² (11.7 million sq mi) including adjacent islands, it covers 6% of the earth’s total surface area and 20.4% of the total land area. With 1.0 billion people (as of 2009) in 61 territories, it accounts for about 14.72% of the world’s human population. Forests and woodlands have played a very critical role in the survival of human populations as they have continued to be direct providers of key basic needs, particularly shelter, food and most importantly, fuel. Yet by 2000, the total forest cover in Africa was estimated to be just below 650 million hectares, equivalent to 17% of the global forest cover and approximately 22% of Africa’s land area (FAO 2001a). There is an inextricable link between Africa’s inhabitants, the forests, energy sources and global Socio-economic and environmental conditions. Heavy reliance on biomass for cooking and heating forces women and children to spend hours each week collecting wood. Women face tremendous challenges including personal insecurity as they trek long distances in search of firewood. This is exacerbated in conflict zones. Despite Africa’s rich energy resource base and surplus hydropower potential, the proportion of the population that has access to electricity or what is known as the electricity grid penetration is still very low. In East Africa for instance, over 81% of the populations in the five East African Community countries live without access to modern energy services. Most of them use traditional biomass burnt in open three-stone stoves which expose the users to health hazards from indoor smoke and fire hazards, but also — due to their inefficiency — contribute to rapid deforestation. In 2002, the World Health Organization (WHO) estimated that indoor air pollution from solid fuel use was responsible for high levels of the national burden of disease in the EAC countries: Burundi 5.2% Kenya 2.9% Rwanda 5.8% Tanzania 4.4% Uganda 4.9% 2 The biomass is consumed in the form of firewood in rural areas and as charcoal in urban areas. This has an overstretching effect on the environment of a given country. This situation suggests that there is urgent need to increase access to clean cooking technologies, especially, in rural areas of Africa, where the majority of the population lives. Renewable energy technologies offer a viable alternative source of energy and energy services, particularly in those areas that are far from cities and established grids. Due to this great need, the Briquettes Business becomes one of the timeliest projects given that all factors are favorable for the time and seasons of the business. Also given that the raw materials are cheaply and readily available, the production costs very low while the demand high and the market readily awaiting, the proceeds are admirable and the BREAK EVEN period conducive for any investor.