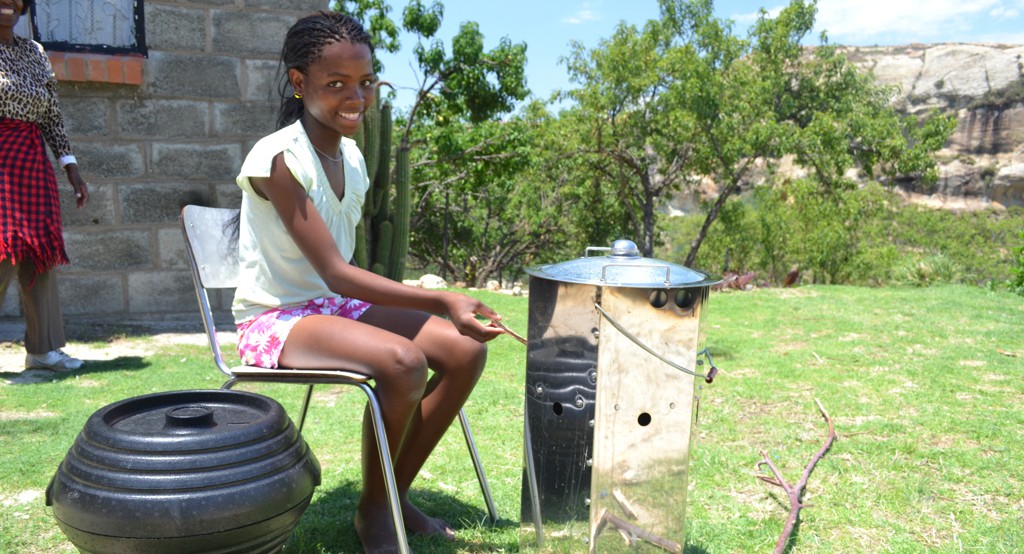 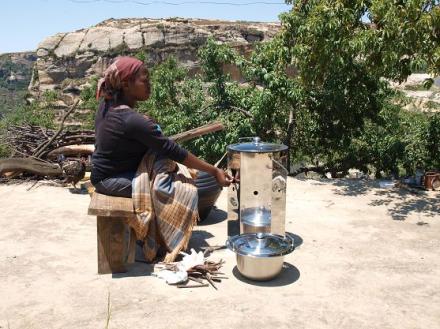 Deforestation and desertification have become a major concern in Lesotho. Wood demand for household energy uses is one of the causes of forest depletion as it largely exceeds the available renewable woody biomass. Wood is often burnt in traditional fires with low efficiency and smoke harmful emission. The project consists in the dissemination of some 14,000 stoves which are 5 times more efficient than traditional cooking practices. The stove, named SAVE80, is a portable device made of stainless steel developed and prefabricated by a German manufacturer and assembled locally to create employment. The SAVE80 system includes custom-fit pots, pans and a heat retaining box to further increase energy efficiency. The core project justification is the CO2 saving from more efficient biomass burning. The project is financed by the sales of Clean Development Mechanisms (CDM) Certified Emission Reduction units (CERs), issued for a period of 10 years. The CERs are sold to Deutsche Post DHL, which in turn offers its clients the option to voluntary offset CO2 transport emission for their postal services. The project is implemented by Lesotho organization ‘Solar Lights’ and the German carbon offset company ‘atmosfair’. Stoves are sold at a reduced price and the incentive is paid back by CERs sales. A monitoring and validation procedure is in place to comply with the CDM mechanism. The project is also registered as Gold standard, a quality certification of CDM projects developed by WWF.

The project started in 2010 and by June 2011 the first stoves were distributed to the target population. By the end of 2013 more than 8,000 stoves were sold. The project target is 14,350 stoves by the end of 2014. The project goes through annual CER validation following CDM and Gold Standard methodologies. Since implementation 2 validations have been carried out. Each stove is assumed to save some 12,5MWh/year. The total CERs released in 2013 amount to 18,062 tCO2eq, slightly less than the ex-ante estimation of 23,000 tCO2eq given the lower number of stoves distributed. Over ten years the project will have an impact of some 344,338 tCO2eq emission reduction. In addition the project wants to achieve other positive environmental and social impacts to qualify for Gold Standard. It reduces smoke emissions, family vulnerability of falling into poverty through fuel security, time to collect wood. By preserving forests it reduces soil erosion and community conflicts to access scarce resources.

CERs will be issued for 10 years. This will pay back the subsidies given out to support the purchase of efficient stoves. SAVE80 are manufactured in Germany and then assembled in a Lesotho workshop. Solar Lights conducts sales and monitoring trainings. Trainings and demonstrations of using the SAVE80 are run in all target areas. ‘atmosfair’ will receive the Certified Emission Reductions and sell them to DHL; DHL will offer its customers the possibility to off-set carbon emission.

The project is designed to fulfill CDM requirements with Gold standard certification. The project cost is paid back by CER sales over 10 years, annual monitoring has to be carried out. This assures long term project results. The project needs to select a long lasting, reliable product able to prove emission reductions over 10 years. On the other hand the technology is developed and manufactured in Germany and the local impact of the project as income generating opportunity is limited to the assembling and distributing phases. The stove sales are facilitated by an incentive. The impact on local stove manufacturing is not measured. Other experiences in the promotion of clean cooking facilities show results obtained without incentives.

The project adopts simplified modalities and procedures for small scale CDM project activities. This implies the project may not exceed 180GWh thermal energy savings per year. Given the estimated annual saving per single SAVE80 at 0.012517GWh, the maximum amount of stoves may be 14,380 units. The project is primarily designed for emission reduction rather than for energy access, there is no scaling-up target. The local ownership is limited as the technology is developed and manufactured in Germany. The project is based on the partnership between (a) Solar Light, an NGO in Lesotho responsible for the implementation of the project, (b) ‘atmosfair’, a German company specialized in carbon offsetting, and (c) Deutsche Post DHL as the financial partner to purchase the project CERs. The project includes strong monitoring and assessment of its results. Assessments are carried out annually to fulfill CDM and Gold Standard verification requirements.

The project is verified by a monitoring methodology that consists in three steps: monitoring, survey and calculation. The number of stoves sold is registered and a database prepared to calculate emission saving. Sample annual surveys are conducted on 1% of total stove deployed. The survey identifies the number of drop outs from the original number of stoves and monitors how the beneficiaries are using the technology. The actual substitution of traditional firewood burning is checked together with the stove thermal efficiency. The survey serves to determine the deviation to be taken into account from original methodological assumptions when calculating emission reduction. The 2013 report lists a number of 8059 stoves; out of a sample of 85 beneficiaries, the auditor managed to conduct 74 interviews, found one drop out (1,37%), and ran 9 water boiling tests. All data collected were found in the range of the proposed methodology described in the original project.