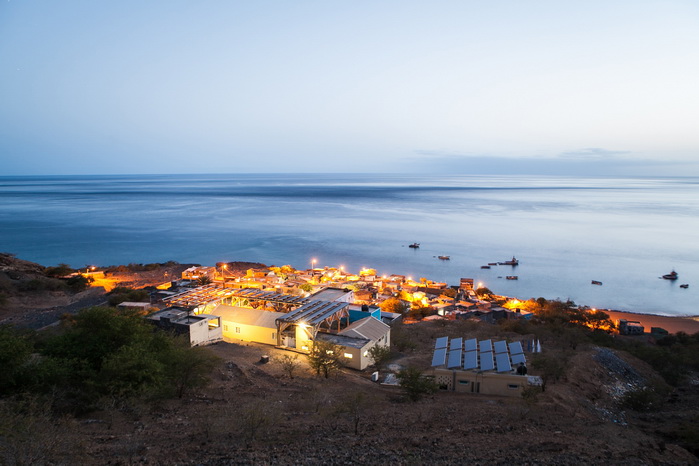 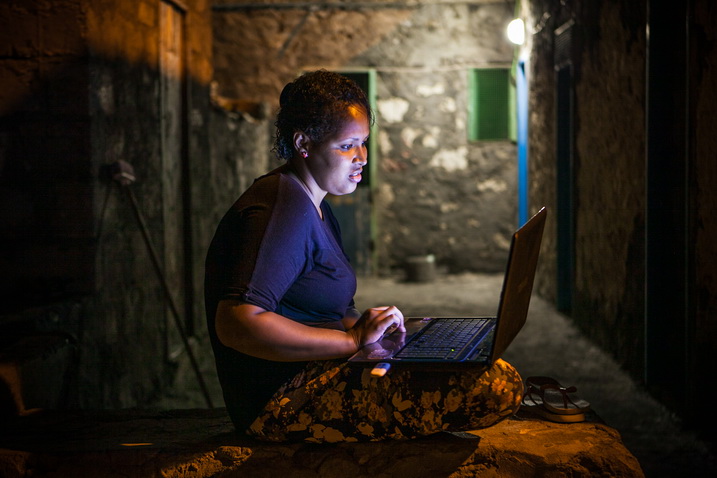 Monte Trigo is fishing village located on the South of Santo Antao Island, with an elevated rate of isolation without possibility to be covered by public electricity. Was built a micro solar central and distribution network.The Project conver them in the first local of the country supply all the electrical necessities from a 100% renewable source.

The project SESAM-ER aimed mainly the improvement of Access to electrecity for 24 hour a day, assuring an electrical service of quality through an exclusively renewable source of energy in a way that assure its own sustain. For that it was built a photovoltaic central initially, 27.2 kWp and later expanded to 40 kWp, with a power distribution network and street lighting. Electrical installations were performed inside the homes, and in some cases improved the existing facilities, distributed counters / dispensers and energy-saving lamps (thus ensuring the use of 100% energy efficient light bulbs). The electrical system was designed with the objective of maximum efficiency of solar energy as a resource, either on the demand side or the supply side. The counter / energy dispenser allows stipulate a fixed consumption value for each dwelling, thus allowing families to control their consumption and, more importantly, allows the demand never exceeds the pre-set value ensuring that generating equipment and accumulation are preserved thus prolonging its lifetime. The rechargeable card allows for better business management service with pre-paid. This project converted Monte Trigo in the first village in the country to be supplied 100% by renewable energy from February 2012.

This Project has as main beneficiaries about 274 inhabitants living in the fising vilage of Monte Trigo, being the majority fishermen. The 33 % are young people with less than 15 years old.

After a year of operation, allowed to know among other data, the following: the purchase of refrigerators increased from 0% to 43,86%; the food storage conditions improved and diversified forms of entertainment (TV, video games, etc.). Activities such as trade and tourism have been increasing (created and even micro businesses tend to come to appear (including small sessions of movies, barber shop, sale of homemade ice cream, bars, etc.) The ice production unit, although not meeting all the local need, has provided a great contribution to the fishing activity, such as improved fish preservation. In education, allowed the children to have access to the use of computers for their research and also the internet connectivity. Since the beginning of operations until January 31, 2015, have been produced 89 MWh, spared 25.974 liters of diesel and avoided the emission to the atmosphere 78 Tn CO2.

Co-financed by the EnergyFacility (EU) program by 75% and 25% by the Town Hall of Porto Novo. Total range of technical and financial management of the electrical service so that revenues are managed in order to support the current management costs and even the partial replacement equipment. The tariff, depending on the needs of each family and/or institution in terms of energy. The amount of energy available to each user every day is fixed and the amount to be paid at end of month is also fixed.

Limiting the consumption since the counters / dispensers each family, is an important factor in the functioning of the service. Being the sources of renewable energy (in this case solar) limited not only by the efficiency of the modules and the limitation of hours of production making it necessary to efficiently manage the energy produced to be guaranteed energy availability night and during periods of low or null radiation. The awareness factor to the limitations of the system and for energy efficiency, contributed to the good use of resources and making people not to waste energy.

The concept and the energy system implemented can serve as an example and replicated in many other remote locations with difficult reach of national energy network. The energy source is 100% renewable, energy autonomy is approximately 3 days, the consumption is controlled, the operation and management is done locally (by local operators, who have been trained and participated in the construction) and remotely. The prepaid card prevents problems in business management. With wind and solar radiation levels significant in the country and the region, electrical central with renewable energy can become one of the future solutions. One way to ensure the sustainability of the service is to involve people in the project, making them feel part and they become the primary to take care of the service which was created for them. Awareness and training activities were carried out for the use of more efficient equipment for energy conservation actions are taken in their homes.

Although the availability of energy in fixed amount, according to the level of the tariff, is already in operation since the start of operations of Photovoltaic Monte Trigo Central, it has not been possible to stipulate the cost of each fee yet (depending on the National Economic Regulation Agency). Until then families have been paying the same amount for different prices. As this is a pioneering project in Cape Verde, ARE is considering several alternatives to determine the final tariff model. To take advantage of the existing energy surplus after filling of the batteries and to improve the conditions for greater economic activity of the locality, was equipped an ice production facility for fishing with two ice machines 2x250 kg / day.