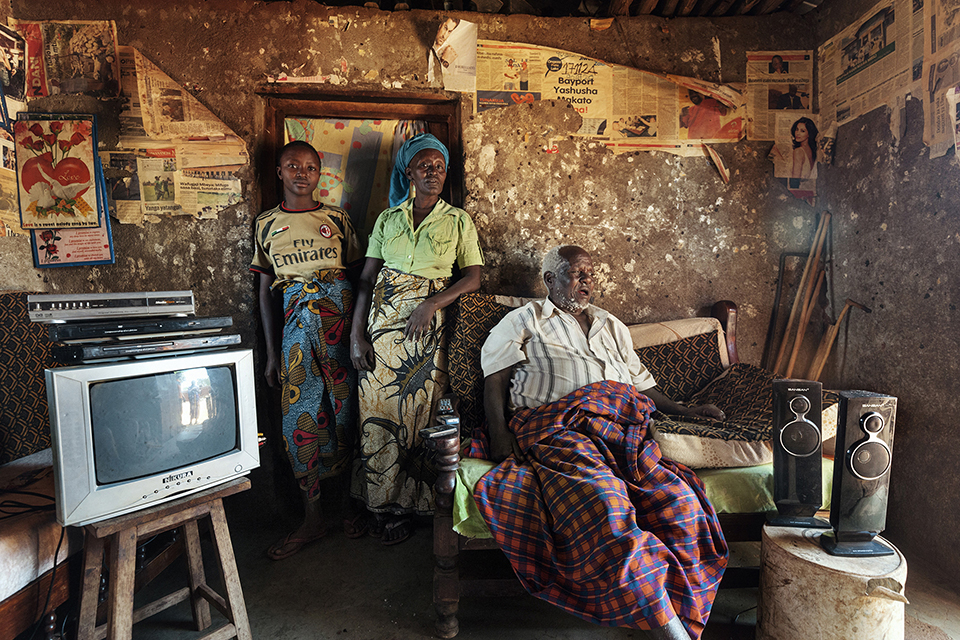 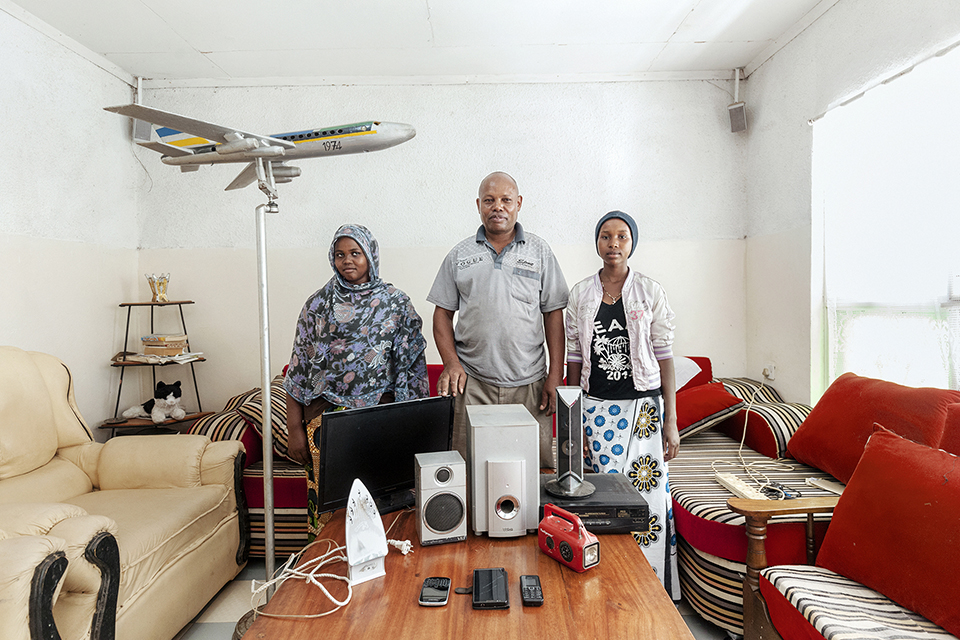 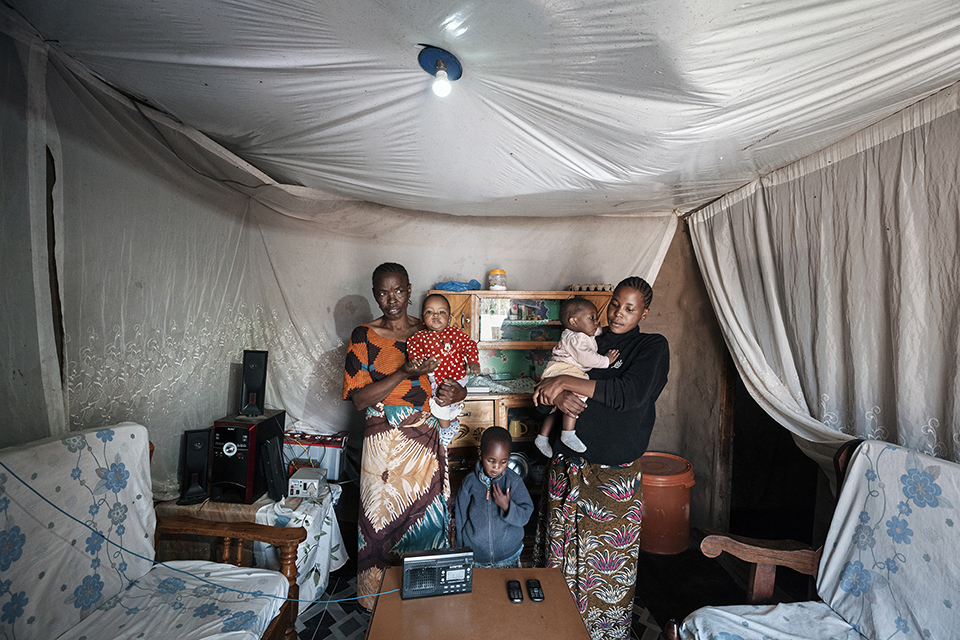 The family of Joyce Gabriel, widow, 7 children, national electricity network passes directly above her house but there is no transformer. 40W solar panel on the roof 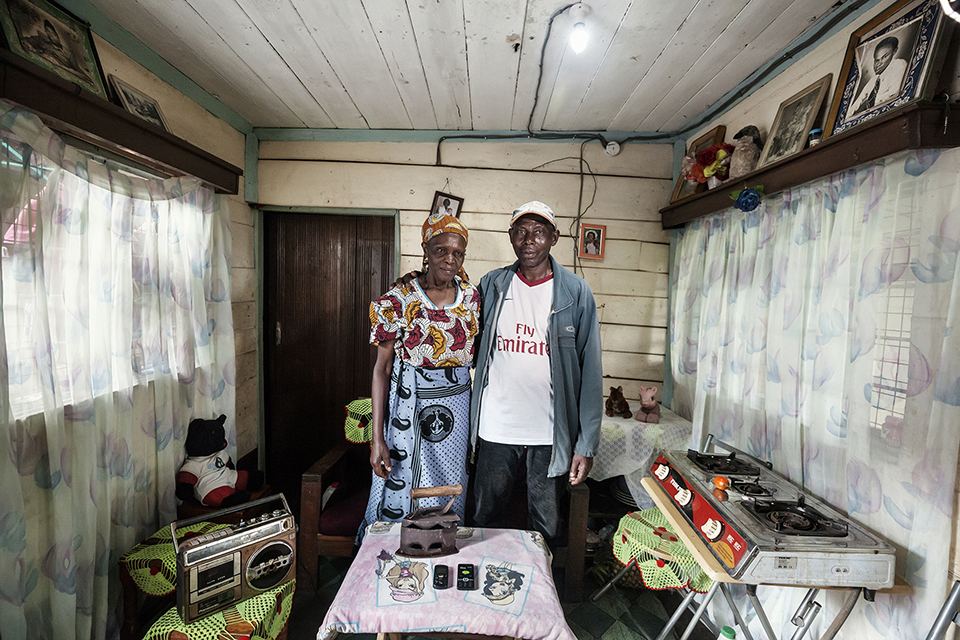 Minja family, Kilimanjaro, they chose to install a 60W solar panel on the roof rather than ask their children to pay electric bills. 65kWh per year 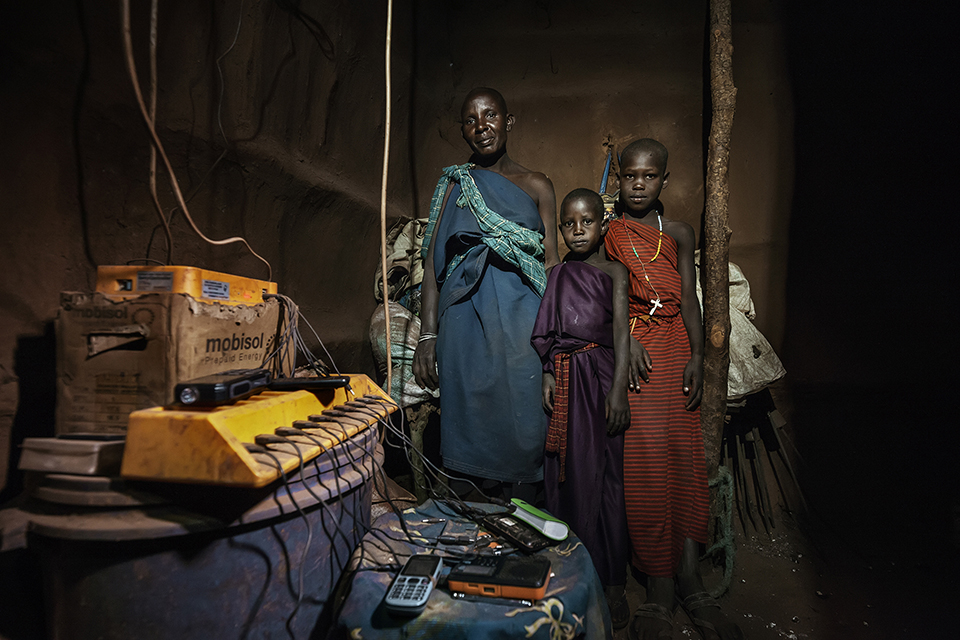 Maasai family, 80W solar panel installation provided by Mobisol, one of the leading pay as you go companies. Payment is made by mobile phone. They recharge all the telephones of the village 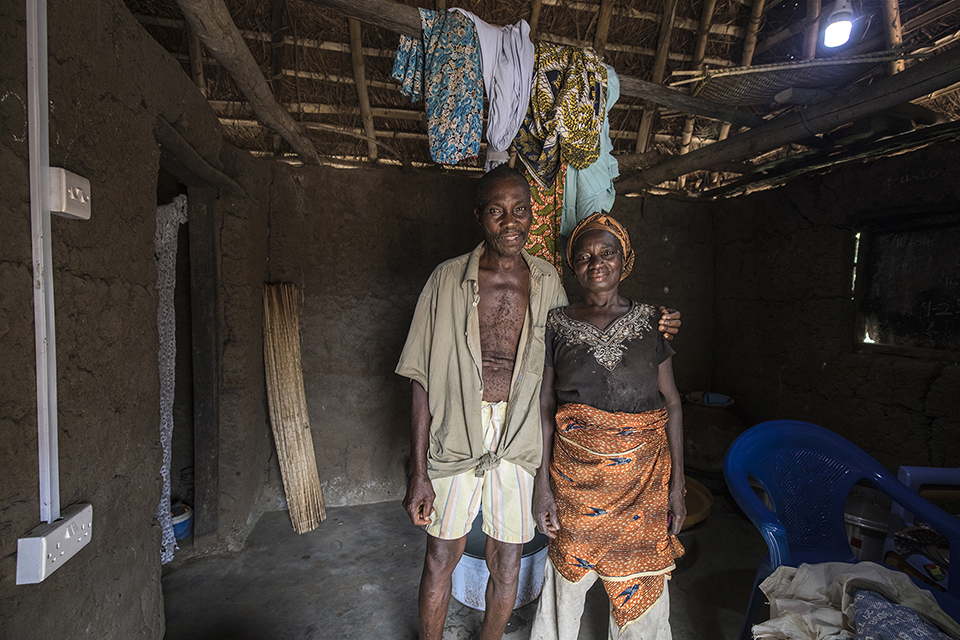 Family in the Volta region, the mat in the background is the bed of the house but there are electricity plugs. The electricity grid has arrived, but they have not yet received the first bill. Before, they had a 5W solar panel. “I am not sure we will be able to pay: electricity comes and goes, solar comes and stays” 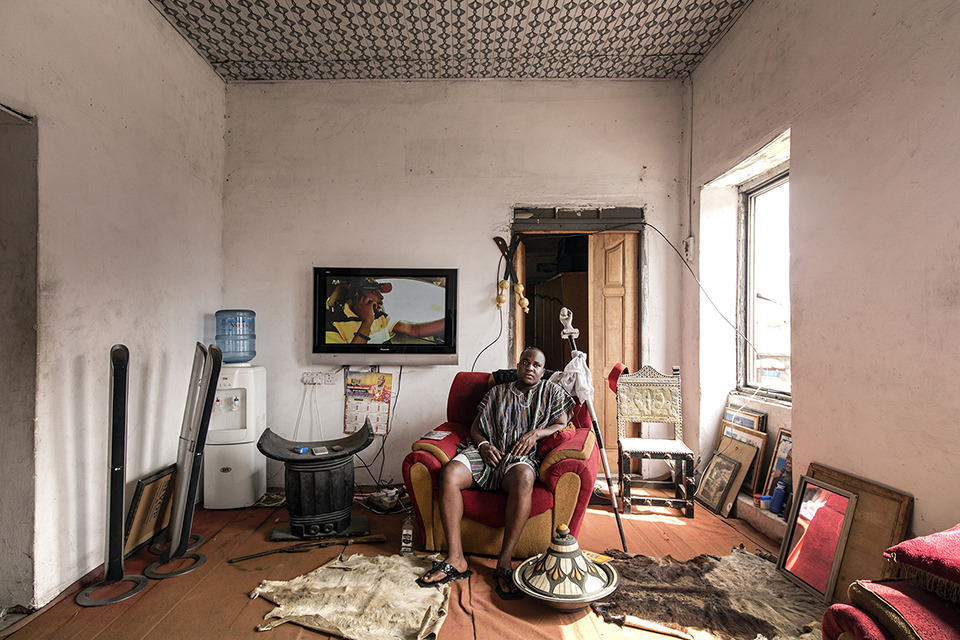 Kofi Abraham II, chief of the Jamestown neighbourhood, Accra. The electric appliances (do they work?) are fused with symbols of a prosperous past. 50€ a month electricity bill 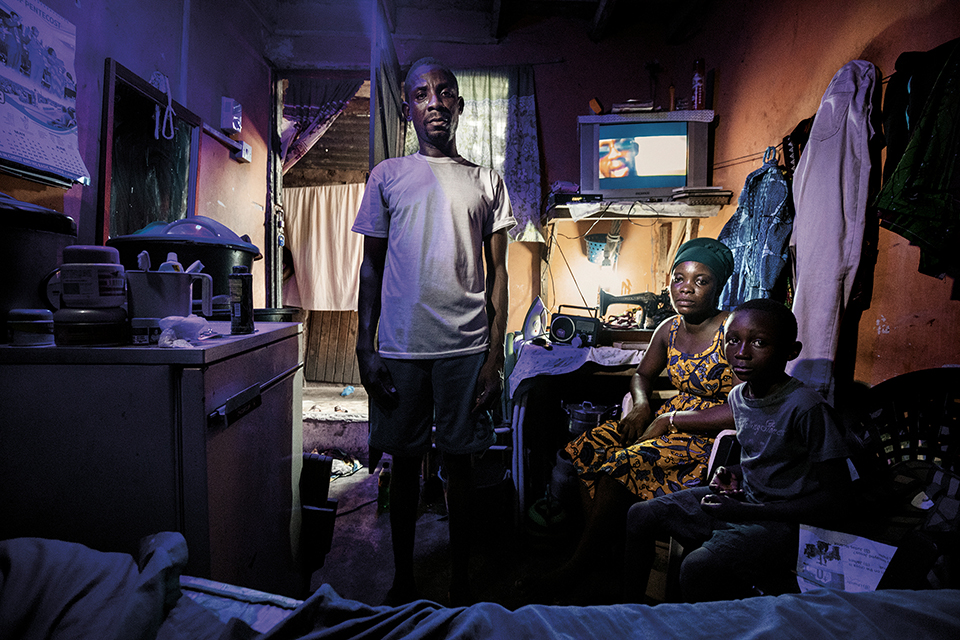 A family of Oginalo Abraham, an Agbogbloshi slum, electricity arrives through three illegal contracts of 2€ each a month. “ With three contracts we have a better chance of getting a service” 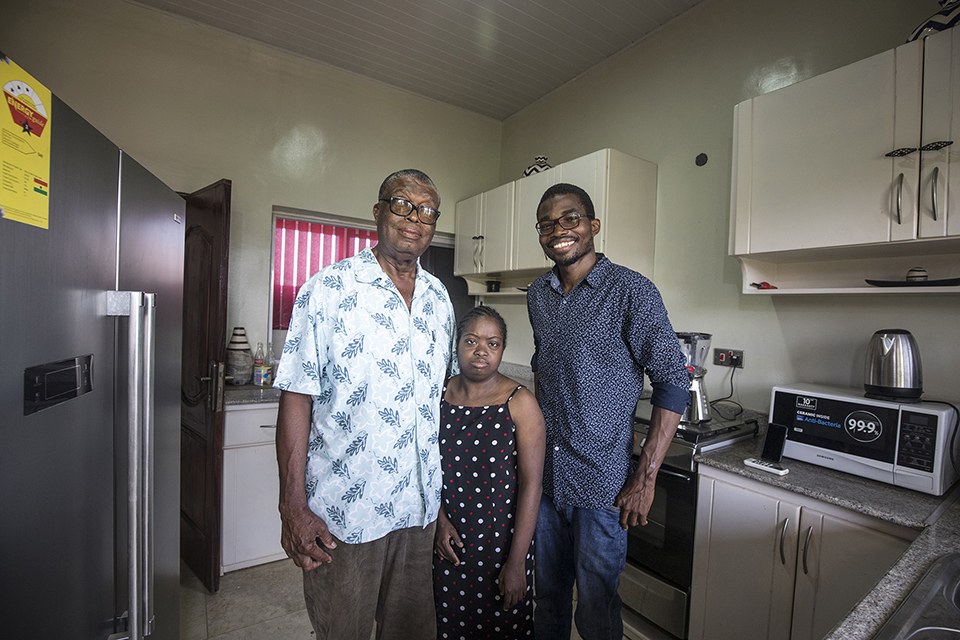 Brown family, Uso neighbourhood, Accra. Ghana is the only African country to have introduced a labelling scheme for energy efficiency of fridges and to have prohibited the importation of second-hand appliances. 60€ a month 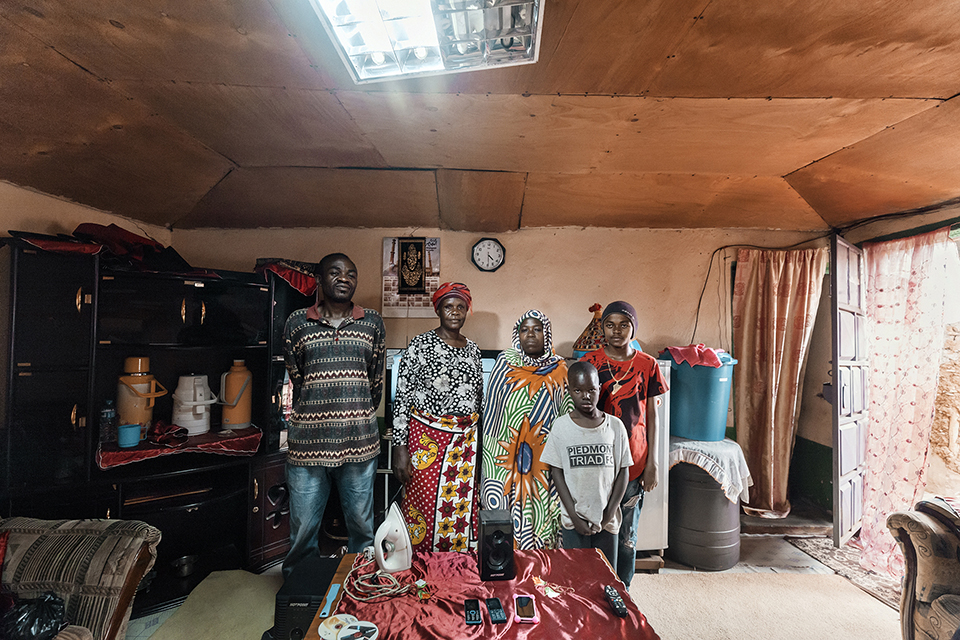 One of the first families from Somalia to settle in Kibera, Nairobi, one of the largest slums of east Africa. Approximately 30€ a month with pre-paid meters 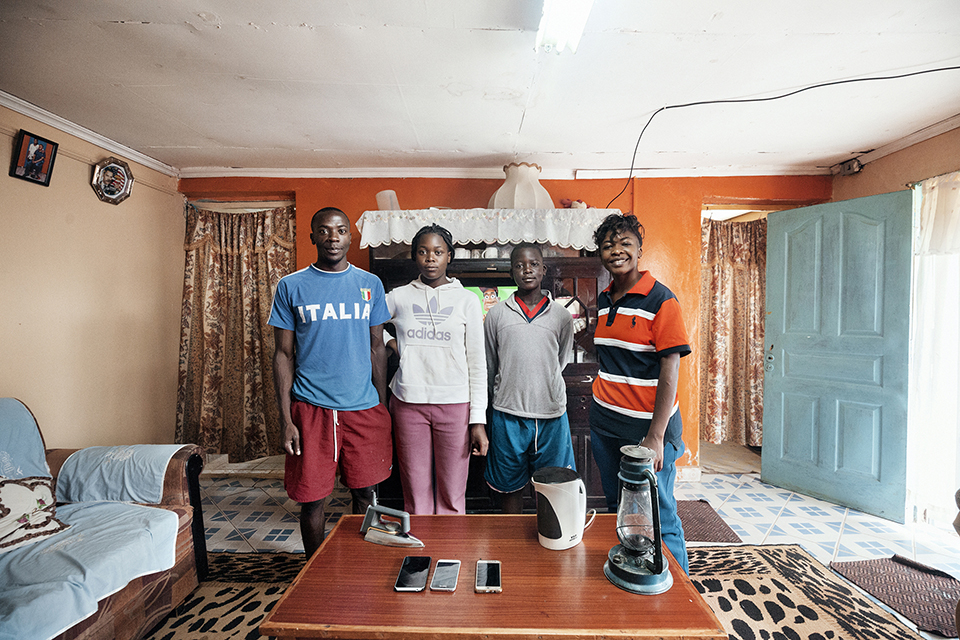 Satellite neighbourhood, Nairobi, each of the grandchilden has their own pre-paid meter in their room. The oil lamp is used when there is not enough money for the meters or when there is a black-out: “when it does not rain there is no water in the dams, and when it rains the network short-circuits” 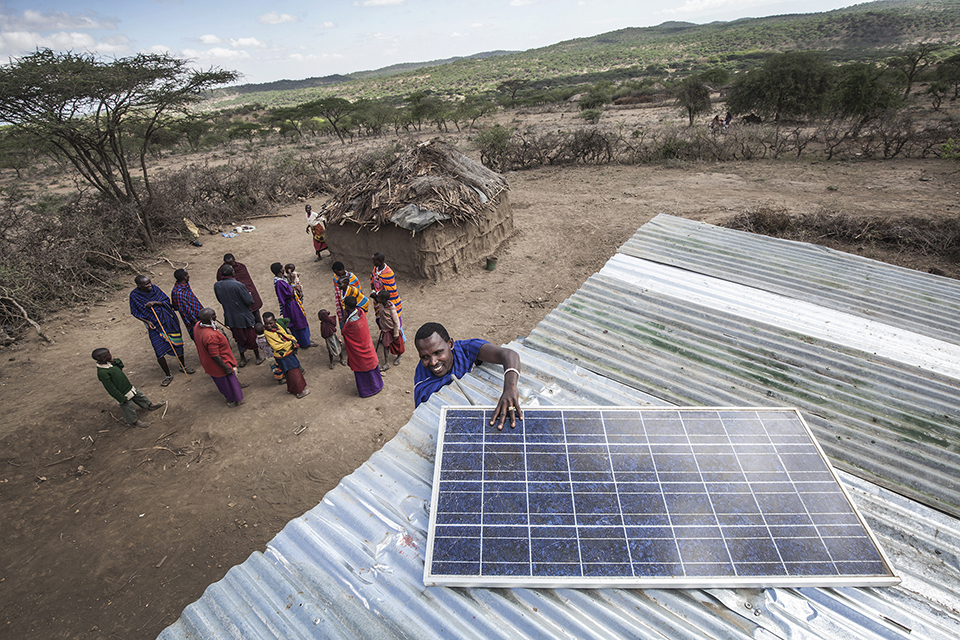 There is no lack of sunshine in the African savannah. 100W solar, purchased in the city, provides light in the huts and charges mobile phones and radios 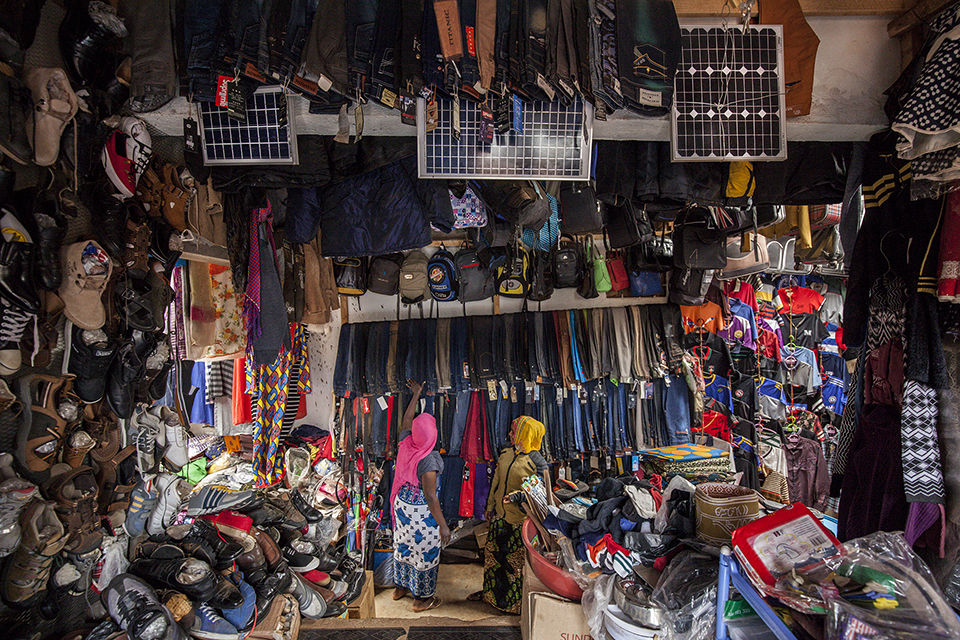 Amongst shoes, fabrics and trousers. Solar panels for sale in a village on the Kilimanjaro. A small solar installation of 40W costs approximately 100€ 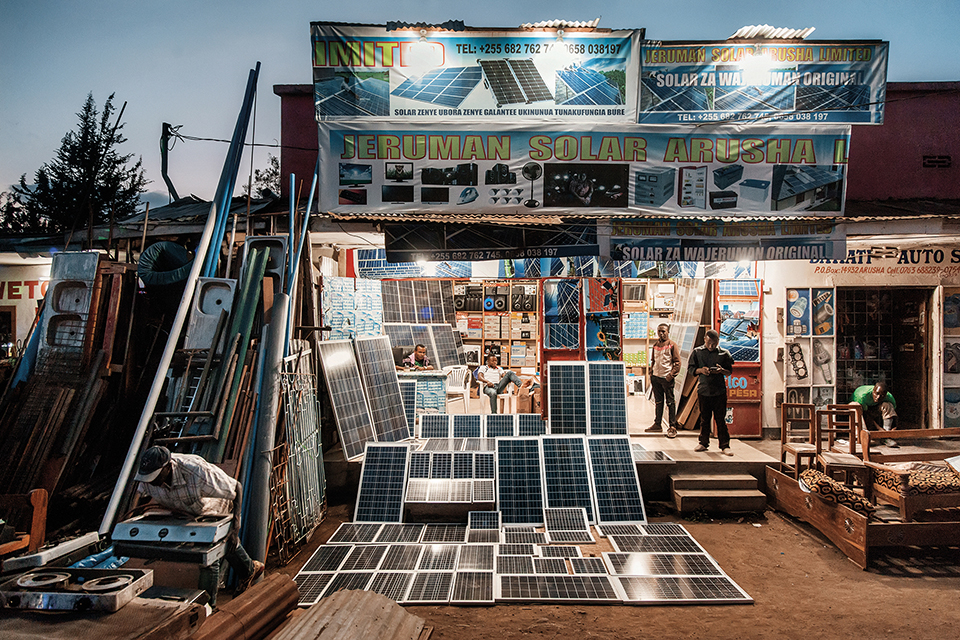 Solar is for all. A shop in Arusha, Tanzania. The World Bank estimates that over 130 million persons benefit from first time energy access through decentralised systems 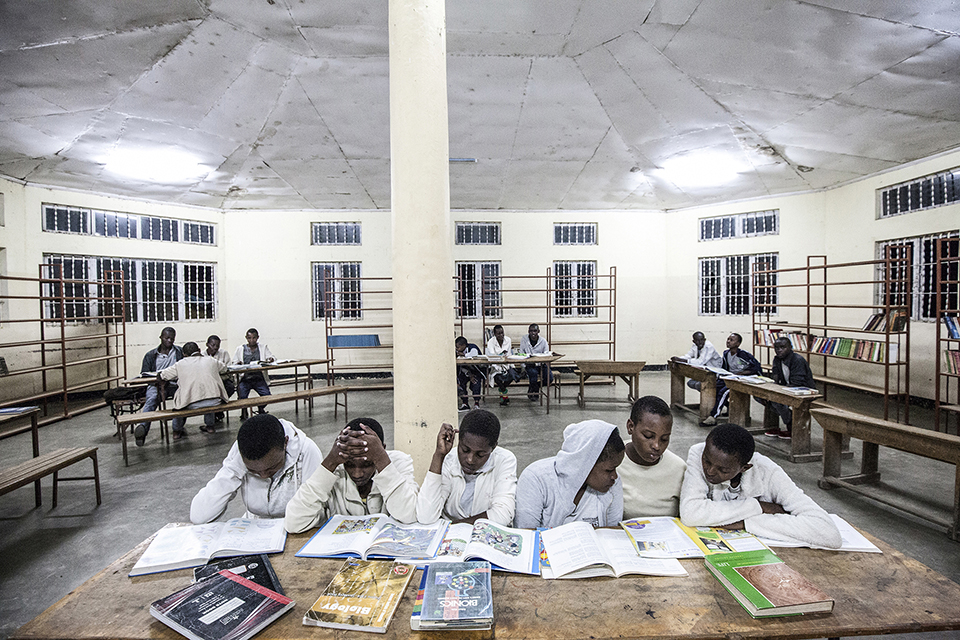 Ngarenanyuki secondary school, Tanzania. “Having electricity does not mean having books, but a possibility to read them” 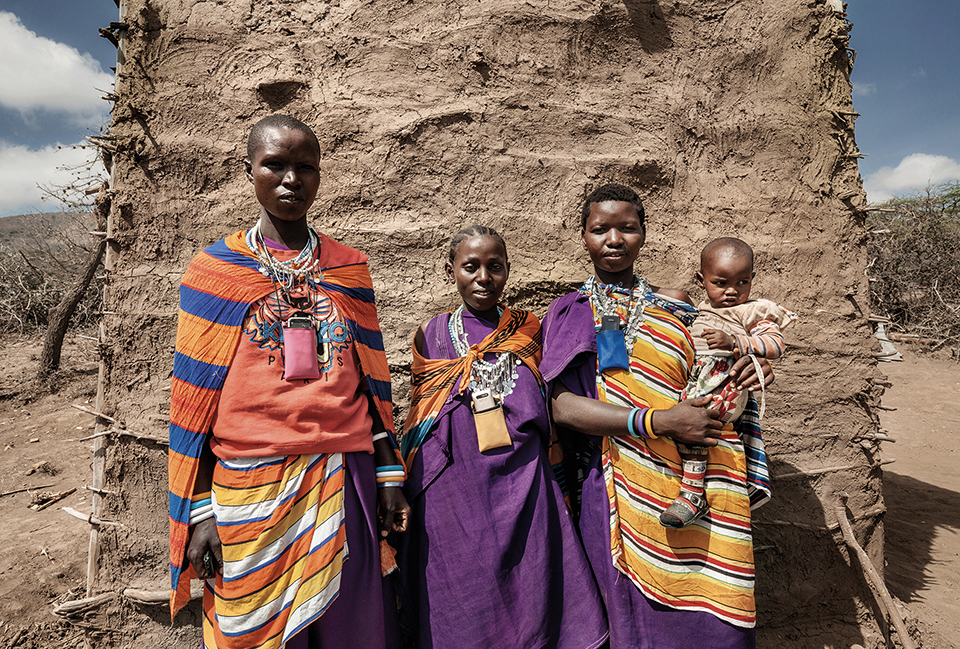 Maasai women, necklaces and mobile phones. Today, mobile phones count among the primary needs of rural populations. The community is perfectly structured and organised to live without electricity, however they are less and less independent 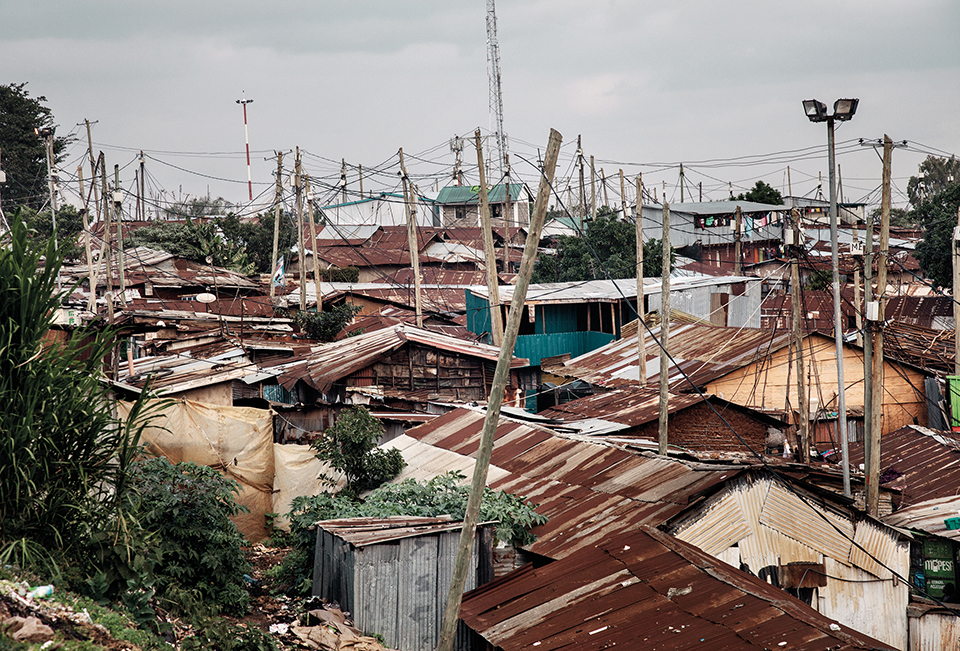 A jungle of electricity cables on the roofs of Kibera slum, Nairobi. Approximately 1 billion people live in slums in the world 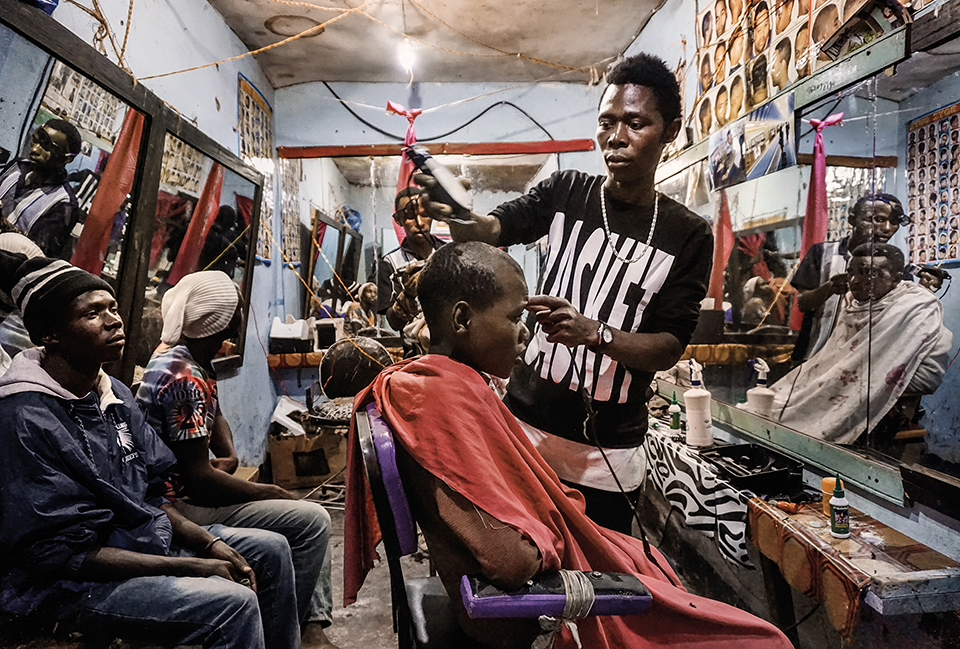 The centre of Olkun’guado, Tanzania, is full of shops and merchants a few months after the arrival of the national electricity network, but electricity does not always promote economic development 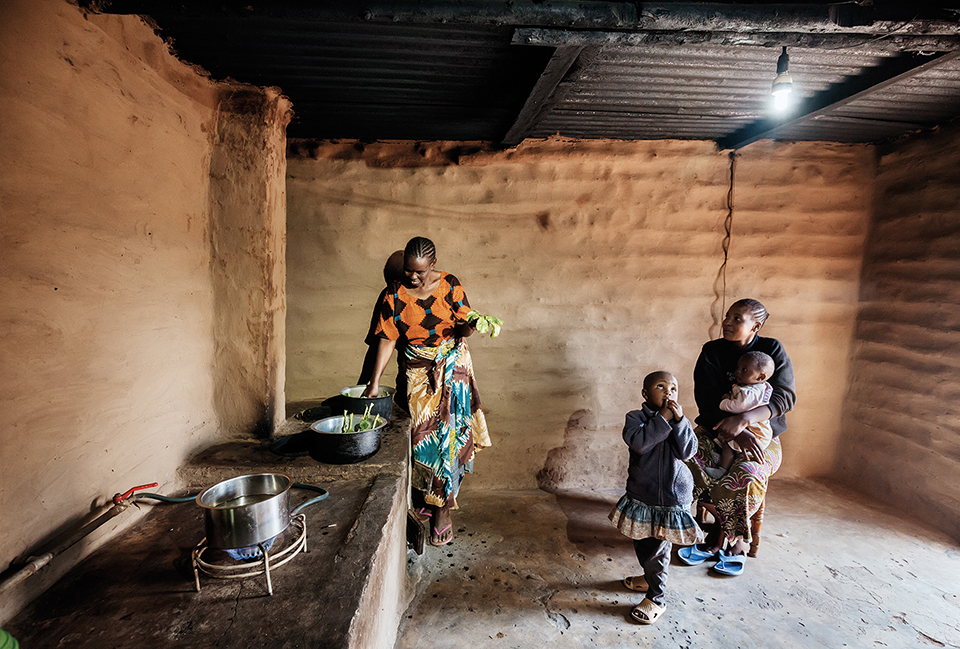 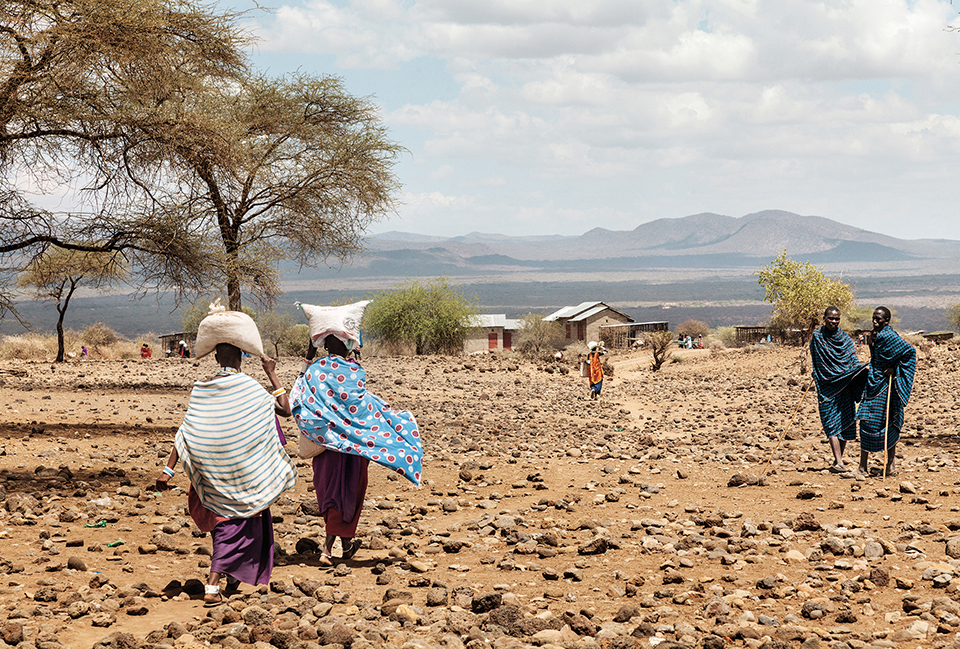 Kitumbeine, Tanzania. A 16kW mini-grid provides electricity to villagers and commercial activities, but it is not yet enough to activate the milling machine. It is still necessary to bring the corn to diesel mills that cost three times more than the electric ones 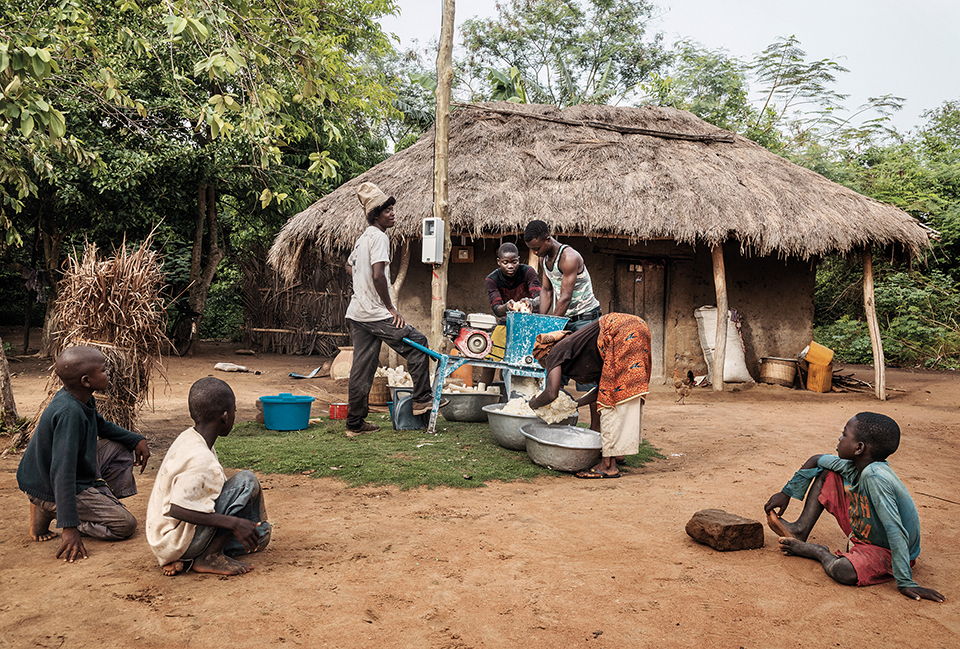 A hut in the Volta region where the national electricity grid has recently arrived, replacing the solar system which has still not been fully repaid. The cassava flour is still ground by a diesel mill shared among all the surrounding villages 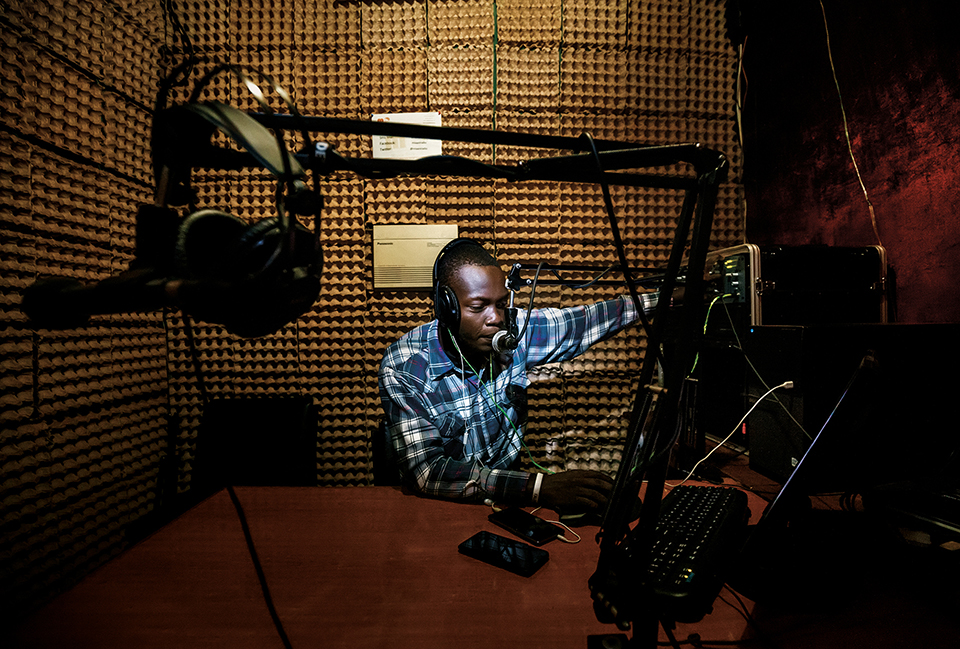 The centre of Kivuli, Nairobi. The radio station entertains the people in the neighbourhood when electricity is available. Communication, perhaps more than lighting, is among the primary needs met by electricity 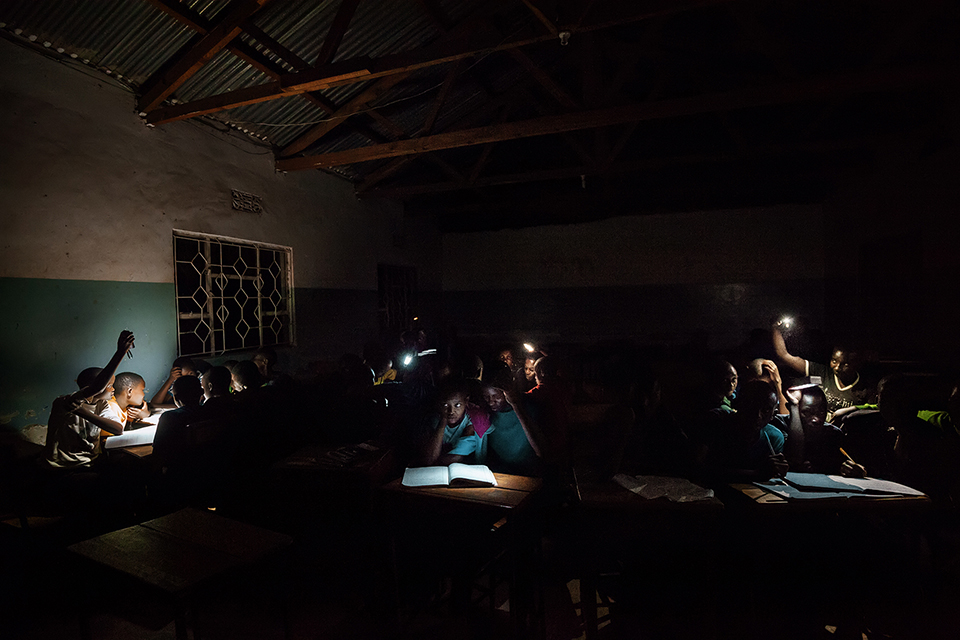 The night before the exam. When light is missing, the young students discover the most important source of energy, the internal one, the desire to study and grow. What a struggle! Providing access to energy for all by 2030, the objective of the United Nations, is an ambitious goal, the success of which is still not certain. There are some areas where failure is not an option. Leaving a secondary school without electricity means not providing the prerequisites for development
Project

Approximately 600 million people, 60% of the sub-Saharan population, do not have access to electricity.
The United Nations has included universal access to modern forms of energy as one of the seventeen Sustainable Development Goals to be achieved by 2030.

But what does access to energy mean? In our minds, electricity is like a switch, either it is on or it is off. However, in today’s world there are many intermediate solutions when it comes to energy access. Recent technological developments have allowed for innovative solutions to meet universal needs. On the ground we observe many new technical options as well as unpredictable consumer behaviour, resulting in a vast range of solutions.

Over 130 million decentralised power systems, mainly solar, together with innovative mini-grids are already supplying electricity alongside the traditional network and offer a service that at times is competitive and more efficient and reliable, while at other times is inadequate, expensive and unable to activate economic development.

The challenge posed by the UN is anything but trivial. It's hard to imagine accessing electricity for less than a dollar a day. It is difficult to think of escaping poverty without electricity.

The photographs of Marco Garofalo take us on a journey through Tanzania, Kenya and Ghana and show us the significance of having access to energy for millions of people.
From family portraits to documentation of daily life; from views of African landscapes to raids in the slums of Nairobi and Accra. Despite all of this, electricity is a presence everywhere.