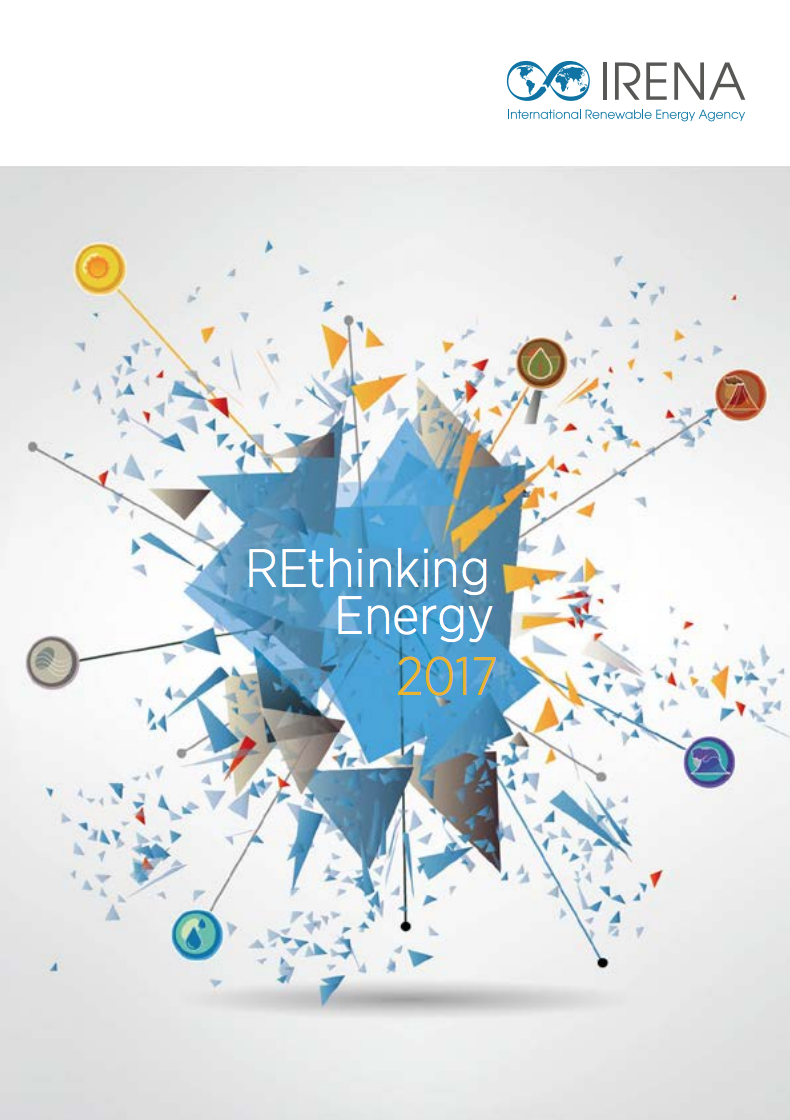 
The International Renewable Energy Agency (IRENA) is an intergovernmental organisation that supports countries in their transition towards a sustainable energy future. It promotes the extensive adoption of all forms of renewable energy in the pursuit of sustainable development, energy access, energy security and low-carbon economic growth and prosperity. The Agency also serves as a platform for international cooperation and is one of the main centres of excellence for policy, technology, and financial knowledge on renewable energy.

‘REthinking Energy’ is IRENA’s flagship annual report that thoroughly examines global trends and developments in pursuing a sustainable energy future. This third edition, (published in 2017, the previous issues having been published in 2014 and 2015), examines the implications of the renewable energy market’s growing maturity, as well as the latest technological and policy improvements.

Renewable Energy Sources (RES) play an increasingly important role in global energy transition.  They often are the first choice for expanding, upgrading and modernising power systems around the world. Off-grid solutions and new technologies are also crucial for sustainable development and the achievement of UN’s SDG n. 7: ensuring ‘affordable, reliable, sustainable and modern energy for all’. Policies and regulations play a vital role in facilitating RES integration in power systems, as well as stabilising the market and attracting new investments.

Currently, the share of renewable energy in global energy consumption stands at 18.3% and it is predicted to reach only 21% by 2030. In this report, IRENA emphasises the importance of raising expectations and doubling this share to 36% by 2030, pushing for mutual and coordinated intervention in policy & regulation, access to finance, investment and technology development.  The accelerated deployment of RES will fuel economic growth, create new employment opportunities, improve welfare and contribute to the fight against climate change. IRENA estimates that reaching 36% of RES on a global level by 2030 would employ 24.4 million people, with consequential benefits for national economies. GDP is envisioned to increase by more than a percentage point over the baseline projection (the additional increase being equivalent to the combined size of the current economies of Chile, South Africa and Switzerland). Doubling the share of RES would also make national governments save up to 4.2 trillion USD per year on expenditures related to climate change and air pollution. A cumulative amount of 12 gigatonnes of energy-related CO2 emissions could also be saved over a 12-year period (2018 to 2030). To accelerate this energy transformation, the report identifies the following areas of intervention:

In order to integrate renewable energy on a larger scale, it is essential for policies and regulations to constantly be updated and adapted to the sector’s changing needs. This is particularly important for RES’ evolving markets. The report highlights a significant shift in the power sector, from tariff-based mechanisms to auctions and describes a growing need for flexibility to be integrated into the electric systems. In 2016, 67 countries launched auctions, a notable increase from 6 in 2005. This resulted in very low prices for both solar and wind power. On the other hand, new measures have to be introduced in power systems to ensure the integration of RES and a higher degree of flexibility. The report identifies several possible solutions and regroups them into six categories of flexibility measures: supply side, demand side, transmission and distribution networks, storage, market design, system operations and management.

As transport, heating and cooling are responsible for 60% of energy-related CO2 emissions, policy makers need to foster the deployment of RES by accentuating potential synergies between the power sector and end-use sectors (following the concept of sector coupling, recently proposed by the European Commission).

Despite their growth, current investment levels are not adequate to meet international climate goals.  The targeted use of public funds can be useful in the early-stage financing of projects. Public funds can also represent a guarantee for some of the investment risks and therefore attract additional private investors. Public financing needs to transition from traditional instruments (such as grants and loans) towards risk mitigation tools that will shield investors from political, currency and power-offtake risks.

New capital-market tools, such as green bonds, can also increase the availability of funds and provide access to new actors. The report also provides good examples of projects supported by several pension funds, stressing the importance of unlocking large-scale investments by institutional investors.

Technological improvements and lower costs are fostering deployment of RES and successfully opening up new markets. Solar PVs costs are now half of what they were in 2010, and IRENA estimates they can be further reduced by 60% in ten years. Furthermore, solar will account for 7% of global power generation by 2030 (6 times higher than today). The average cost of electricity for utility-scale PV could be reduced by more than half by 2025. Electricity storage, batteries, in particular, will play an important role in supporting energy access, as it will unlock the possibility of integrating variable renewable energy (VRE) into the existing grids. IRENA estimates that battery storage can increase from today’s 1 GW to 250 GW by 2030. Its market value is expected to rise from 2.2 billion in 2015 to 14 billion USD by 2020.

The report sets the ambitious goal of doubling the RES share to 36% by 2030 and provides a comprehensive look at the role of RES in ensuring a sustainable energy transformation on a global level. The analysis identifies four main areas of intervention, where extensive data and projections are presented. Each chapter also showcases several successful examples and introduces future challenges and critical issues.

The new renewable target set by IRENA appears rather ambitious in its practical implementation. The report indeed highlights how the deployment of RES can only be accelerated by strengthening policy, financial, technological, institutional and regulatory capabilities, and by reinforcing public-private partnerships. Nevertheless, these efforts might be insufficient or hard to realistically implement to reach IRENA’s ambitious goal by 2030.

1) Actual renewable targets and policy commitments worldwide are generally lower and uneven. Despite the EU revising its 2030 energy strategy, it committed to increase the share of RES from 27% to 32%. China has formally committed to increase its RES share to 20% by 2030 (despite the fact that the country is likely to reach the share of 30% because of its fast-paced evolution in energy policy and technology). Only India has officially committed to increase the percentage of non-fossil-based energy resources to 40%. Moreover, projections based on the current policies and investment patterns in the United States and in Russia (two key players in the energy global scenario), are not optimistic. In the US, the RES share is expected to reach only 10% by 2030. In Russia, it is estimated to reach only 5% by the same year. Such variety in expected results suggests that to meet IRENA’s renewable target, a stronger and more homogenous political effort would be needed at the global level, along with a drastic change in some of the key actors’ long-term energy policies.

2) Technology diffusion and lack of investment represent critical issues for developing countries that are struggling with no – or very limited, access to reliable energy. Their ability to attract substantial investments to fill in the technological gap strongly depends on their political stability.    This cannot be taken for granted and can surely hinder IRENA’s real-world implementation.

3) As RES are reaching their maturity in developed countries, it is critical to ensure their effective integration in the existing energy systems. Solutions must be implemented to increase the systems’ flexibility and support their value. Without this, increasing the deployment of renewables could slow down and make IRENA’s target hard to reach by 2030.