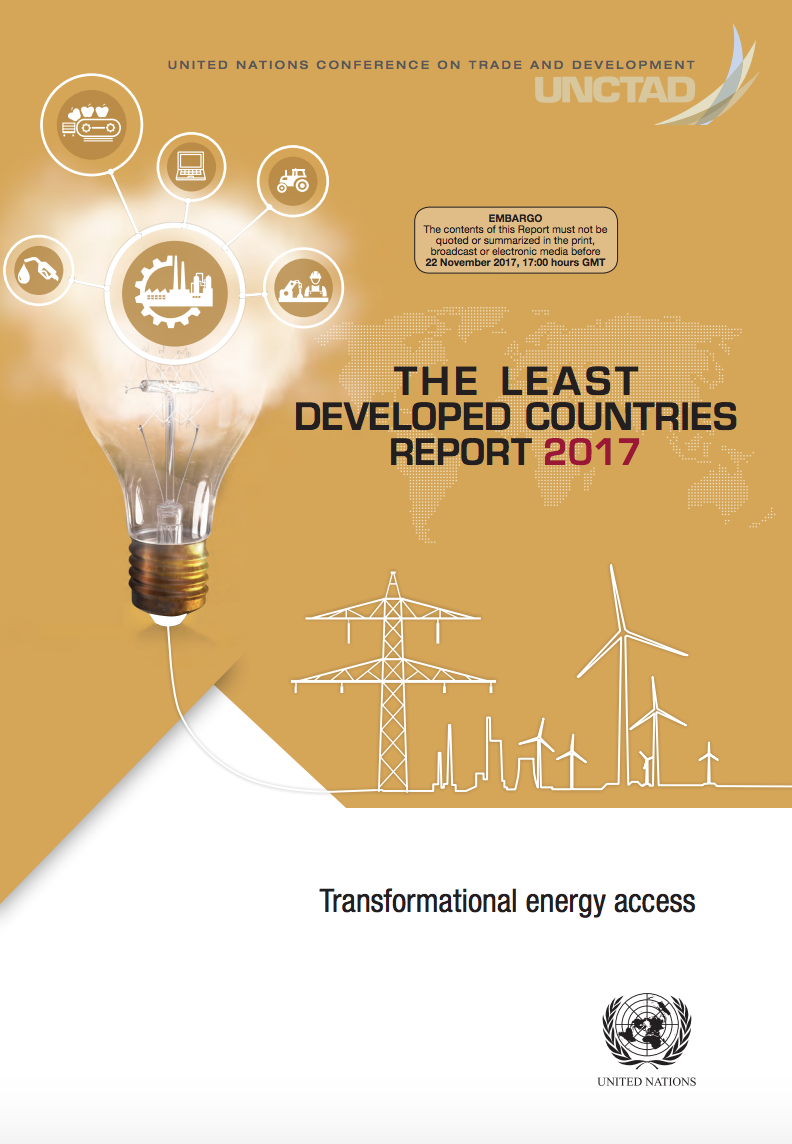 The United Nations Conference on Trade and Development is a permanent intergovernmental body established by the United Nations General Assembly in 1964, located in Geneva, Switzerland. Together with other UN departments and agencies, it is devoted to measuring progress in reaching the Sustainable Developments Goals, as set forth in the Agenda 2030 approved by the UN General Assembly in September 2015.

The UNCTAD publishes a yearly report on the Least Developed Countries. These are identified by the United Nations using three criteria: per capita income, human assets (nutrition, health, schooling, literacy), and economic vulnerability. There are 47 countries in the list, which is reviewed every three years.

Previous issues of the Least Developed Countries Report have argued that the least developed countries (LDCs) are the battleground on which the SDGs will be won or lost. They have highlighted progress achieved and policies that can be addressed on topics such as "Transforming Rural Economies” (2015), and “Growth with employment for inclusive and sustainable development” (2013).

The 2017 Report deals with SDG number 7: “Ensure access to affordable, reliable, sustainable and modern energy for all”.

Its subject is “Transformational energy access”. The central idea is that defining access to modern energy as universal household access is overly narrow and potentially misleading. To achieve the Goal, access for productive and other non-domestic uses is necessary, as well. Reaching the full developmental potential of access to modern energy requires “transformational energy access — energy supplies and technologies that meet the needs of producers and of structural economic transformation”.Main Statements

OVERVIEW: As access to electricity has increased to much higher levels in other (non-LDC) developing countries (ODCs), it has also resulted in an increasing concentration of energy poverty in LDCs with regard to lack of access to modern energy.

By 2014, the majority (54 percent) of people without access to electricity worldwide  lived in LDCs — more than four times their share of the global population (13 percent), and approaching double the proportion in 1990 (30 percent).

Despite an impressive rate of progress in recent years, only four of the 47 LDCs could achieve universal access. In nearly a quarter of the LDCs, by contrast, achieving universal access by 2030 would require the number of persons gaining access annually to be 10 times higher in the coming years than over the past decade.

Electricity generation capacity per person in LDCs is 8.3% of that in Developed Countries. 62% of people living in LDCs have no access to electricity. 42% of firms in LDCs identify electricity as a major constraint.

MAIN CAUSES: a characteristic combination of limited urbanization and sparsely populated rural areas, make conventional centralized generation systems economically unviable for most of the population. This obstacle is greater in an environment of low incomes and limited resources for investment.

POTENTIAL SOLUTIONS: Rapid technological progress in renewable energy technologies, and associated cost reductions, are opening up an unprecedented opportunity for the electrification of rural areas through decentralized generation and mini-grids.

Adoption of a Transformational energy access framework involves the assessment, planning and implementation of energy policies and investments.

-       Concept of Transformational energy access, extending the traditional definition of access to energy to include removing the obstacles to economic development.

-       Emphasis on the need to revise indicators of access, adopting a multi-tier approach and including consideration of a progressive upgrading in access over time.

-       Household vs Industry: assertion of the need to give equal priority between productive and household uses of electricity.

-       Estimation of the relative shares of grid extension and off-grid technologies in rural electrification: forecasting for LDCs suggests that universal access by 2030 would require 571 million more people to be connected to grids and 341 million people to mini-grids, while 114 million would require stand-alone systems.

-       Estimation of the LDCs electricity infrastructure finance gap. Assessing the cost for universal access in African LDCs presents a very large range,  between $18 billion and $900 billion, depending on the tiers of access provided and variations in diesel prices.

-       A broad description of new actors in finance and of operational issues in financing access.

-       Local assimilation capacities: innovative capabilitiesare particularly critical in the energy sector, given its complexity and the importance of context-specific conditions to technology design, its integration in the broader electricity system and the viability of the underlying business model; however skilled workers with science, technology, engineering and mathematics backgrounds remain scarce, women being particularly underrepresented.

-       Finance: large upfront costs, irreversible investments, high uncertainty and risks, and carbon lock-in, represent only some of the characteristic obstacles to private financing of electricity investments.

-       Virtuous circles. Access to energy helps structural transformation of the economy, and structural transformation fuels growth of production and incomes, therefore contributing to a higher and higher energy demand. Plans for development and financing of energy development may have to be upgraded repeatedly, and the impact on environment may have to be re-assessed.