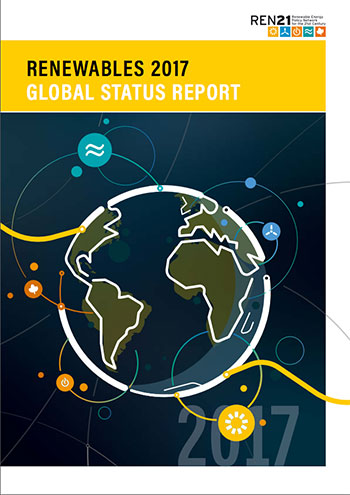 REN21 is the global renewable energy policy multi-stakeholder network that connects key actors such as governments, NGOs, research and academic institutions, international organizations and industry. Its key goal is to facilitate knowledge exchange, policy development and joint action towards a rapid global transition to renewable energy.

The Global Status Report is published annually by REN21. It is a collaborative peer reviewed report that draws on its large network of over 800 contributors and reviewers. It provides up to date information and infographics detailing the status of renewable energy across the world

Energy access can be provided by Household level devices/systems, community-level based systems and grid based electrification. The chapter focuses on the first two means, with a focus on Distributed Renewable Energy (DRE) Systems which are “power, cooking, heating and cooling systems that generate and distribute services independently of any centralised system”. DRE systems are cheaper in many cases, they are price stable, reliable and have stable input costs and have the flexibility to be designed as required. Additionally, DRE systems play a role in reduction of poverty, increasing resilience, climate change adaptation and mitigation, improved health from cleaner cooking fuels etc.

Amongst DRE systems, off grid solar energy has grown in the last years with, 8.2 million systems installed in 2016, a 41% increase over 2015, mostly in East Africa and India. There have been increases in sub 100 kW wind systems in China. Biogas and micro Hydropower systems too continue to be adopted. Improving standards of energy efficiency also plays a part in increasing energy access; though there are current challenges to it, global efforts to address those challenges are ongoing.

Energy access also involves cooking and heating energy: wood, charcoal and dung are still widely used around the world for cooking. Substitutes include improved biomass and biogas cook stoves and electric hot plates. In 2015, 20 million clean cooking stoves were distributed, 18% increase from previous years. China has been leading installation. Outside China, sub-Saharan Africa and South Asia were major markets. Solar cookers too are being installed, with China leading here too. The use of biogas for cooking has also continued to increase, in Asia with China & India with 42.6 million and 4.7 million biogas plants installed respectively as of 2016. Biogas has seen adoption in Kenya and Ethiopia, in Africa and Nicaragua in South America. Investments in Total Energy Systems, integrating different technologies, such as Solar PV, wind, diesel and energy storage options is also increasing slowly with a few success stories from Africa.

An estimated annual investment of USD 50 billion is required to ensure energy access for all. Current investments were only around USD 13 billion in 2013, with main sources being multilateral organisations and bilateral donors. Investment in energy access remains a small fraction of the total investment in clean energy activities. Funding currently is from sources such as the World Bank, ADB, AfDB and so on. However, investment in DRE systems is now being made by private firms, where funds are raised through a mix of debt financing and equity.

Some popular business models are distributed energy service companies (DESCOs) for mini/micro/pico-grids, the PAYG model for stand-alone systems, and microfinance/ microcredit. Under DESCO, the customer pays regular fees for use of the energy system that is owned, operated and maintained by the supply company. The PAYG model is where companies sell DRE systems in exchange for an upfront fee and regular payments. This model has met with success in East Africa, where M-KOPA installs 500 new SHS a day. Under the microcredit model, the purchasers take out a small loan from a bank to cover the costs of installation. This has become popular in India, for solar PV and clean cooking devices as microfinance solves the issue of the upfront costs of these systems.

Barriers include: policy uncertainty, lack of access to financial capital for both companies and consumers, subsidized kerosene and diesel, fiscal and import barriers (tariffs, VAT etc), lack of awareness among consumers, lack of product standards and lack of skilled workforce for installation and support.

There have been encouraging developments towards addressing the SDG 7, with more than 106 countries engaging with the UN’s SEforALL platform - contributing or working on national strategies and investment plans. Organizations such as UNDP, Energizing Development and Power Africa have invested in energy access issues. The Global Alliance for Clean Cookstoves continued to expand its operations and invested in awareness building and behavioral change communications.

The future of DRE is looking up thanks to Mobile technology, PAYG business models, availability of microloans, the viability of micro-grids and falling technology prices. Increased funding and policy support could further help increase adoption.

The chapter gives a comprehensive look at the current scenario of energy access, focussing on DRE systems. There is a lot of data presented from developing nations across the world, Illustrating the increase in energy access. The publication also spells out the challenges faced in terms of funding for energy access, and showcases cases where private enterprises are taking the issues forward, in addition to the more traditional advocates, such as UN organizations.

Funding is an issue, as most of the funding still comes from international organizations and is inadequate. Policy issues are still a major barrier towards the adoption of DRE technologies, work is needed towards streamlining norms, taxes and ensuring quality to build confidence amongst private investors as well as consumers.